A documentary by gay adult film star-director Michael Lucas is one of the highlights of the Atlanta Jewish Film Festival, which opens Wednesday and includes seven gay-themed titles spread across the ATL over three weeks. 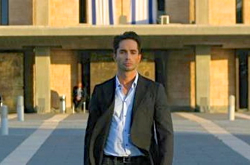 Lucas’ “Undressing Israel: Gay Men in the Promised Land” (trailer above) is perhaps the highest profile LGBT film at the festival. The feature debunks the perception that Israel is merely an area with nonstop violence an lots of camels. Instead and surprising to many, it’s become a highly attractive gay destination over the years.

“No movie like this exists,” Lucas (top photo) says. “People don’t know about Israel. They think it’s a war zone. I wanted to show what it’s really like.”

Featuring interviews with a dozen or so gay men, including politicians and soldiers who serve openly and equally in the military, the film presents an area that, in many ways, is more progressive towards LGBT issues than the U.S., Lucas feels. Tel Aviv’s nightclub scene, too, is hopping and very gay friendly. According to Lucas, Israel has more gay families then other countries per capita.

Lucas also interviews famed director Eytan Fox of “The Bubble” and “Yossi and Jagger” for the film and ends it with a wedding between a male couple.

Another festival film with gay content is “Koch,” Neil Blansky’s documentary about the former mayor of New York. Absorbing and comprehensive, it focuses on Koch’s volatile relationship with the LGBT community, especially after the AIDS epidemic rages through the city and Koch is perceived as closeted and unwilling to do more. Perhaps not so ironically, one of the screenings is introduced by Mayor Kasim Reed, himself no stranger to run-ins with the local LGBT community. “Koch” screens Sunday, Feb. 10, at 7:50 p.m., Tuesday, Feb. 12 at 2:50 p.m. and Sunday, Feb. 17 at 1:40 p.m., all at Lefont Sandy Springs. 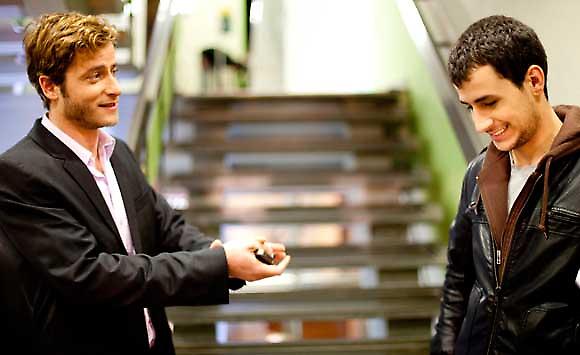 “Out in the Dark” (bottom photo) finds two young men – an Israeli lawyer and a Palestine grad student with a bad news family including a terrorist brother – falling for each other. The two leads are hot and the film doesn’t have the altogether tragic ending you might expect. It screens Wednesday, Feb. 6 at 8 p.m. at the UA Tara and again Friday, Feb. 15 at 12:10 p.m. at Lefont Sandy Springs.

A few other films that might resonate are the gay-themed “Joe Papp In Five Acts” about a transformative figure of American theater through the recollections of many famous faces of the stage and screen, the short film “The Seder” about a young man who brings home his boyfriend for a family gathering, and “The Devotion Project: Listen from the Heart,” a documentary about two women from their first meeting through the birth of their son.