Flash forward to 2020, and Fair never expected to beat out his fellow nominees for the crown. As they say, the nomination alone is an honor.

“I really almost couldn’t wrap my head around the idea of all the people who were willing to support me as the person I am,” Fair told Project Q. “I was happy to have made court and bring attention to the gender non-conforming community at my school. That was enough for me.”

Six years have passed since Eris Lovell (formerly Sage Lovell) was elected to the homecoming court at Walton High School in Marietta, and five since fellow students re-elected her to the court in 2015. She is believed to be the first homecoming courtier in Georgia and helped highlight the struggles trans students face.

Fair said he was “pessimistic” about his chances of winning.

“My experiences with transphobia had taught me that I was not as valid as a cisgender man,” he said. “So standing next to three of them for such a gendered spot in front of the student body made me feel a sense of dread.”

On the big night, Fair shrugged in the direction of his girlfriend as they announced the winner. Then came something like an out-of-body experience.

“When they read off my name, and the crowners ran up to me, I was absolutely shocked,” he remembered. “The feeling of gender euphoria I felt in that moment was absolutely refreshing. I felt like, for once I was valid, and everyone at the school thought so too.”

Of course, a lot of tough lessons and a few refreshing surprises pave the road from gender dysphoria to “gender euphoria,” the newly crowned Homecoming King said. 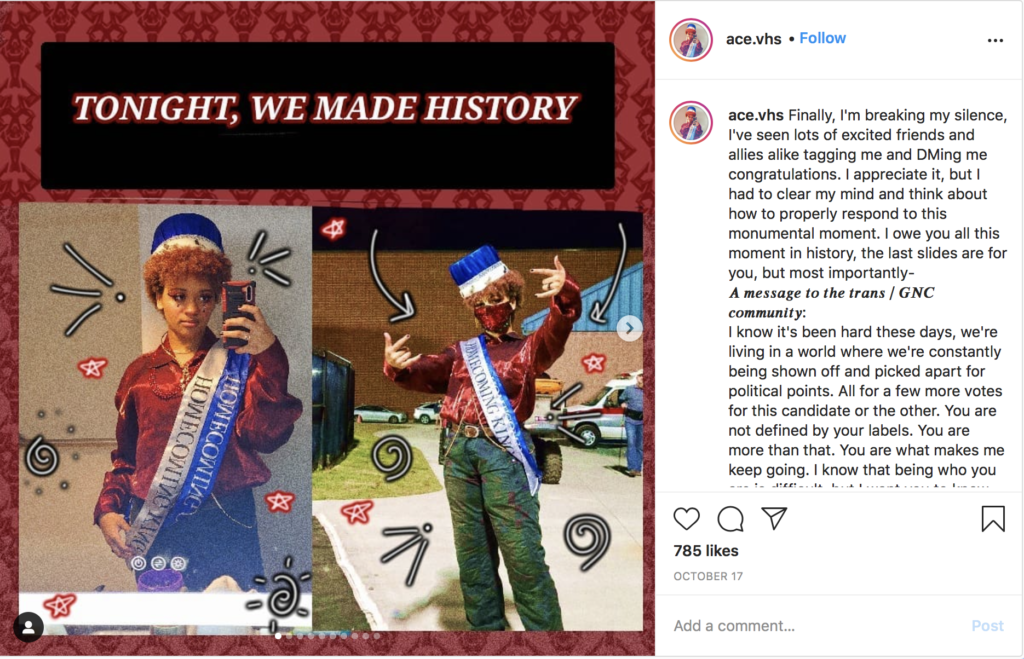 Fair knew he was trans in early childhood, and at 15, an out member of his color guard finally made him realize that he, too, identified as transgender. He came out to select people in 9th grade and went public with his identity at the age of 16 as a sophomore, he said.

“Being out for me certainly makes me feel better,” Fair said. “The validation of being addressed by my proper name and pronouns at school, and also knowing there are my friends who will correct people dead-naming or misgendering me.”

In fact, Fair counts quite a few influential students and faculty among those allies. His girlfriend stood by him as he came into his identity, and homecoming queen Viha Umashankar (top photo, right) encouraged him to run for the court.

“What started as a joke when she texted our group chat and said, ‘We should all run for homecoming court,’ turned into history and a pivotal moment in my life,” Fair said. “I cannot thank her enough.”

The school’s principal, Kindra Smith (photo, center), was also on the side of making history. In Georgia, she could have just as easily made news instead — for an unwillingness to accept Fair for who he is, he said.

“I thank [Smith] for the willingness to learn and her support of the trans community in our school,” Fair said. “I also would like to thank the homecoming planning committee for not turning this into another anti-LGBT story about a young transman who was placed on the female ballot, but instead one about overcoming adversity and triumph.” 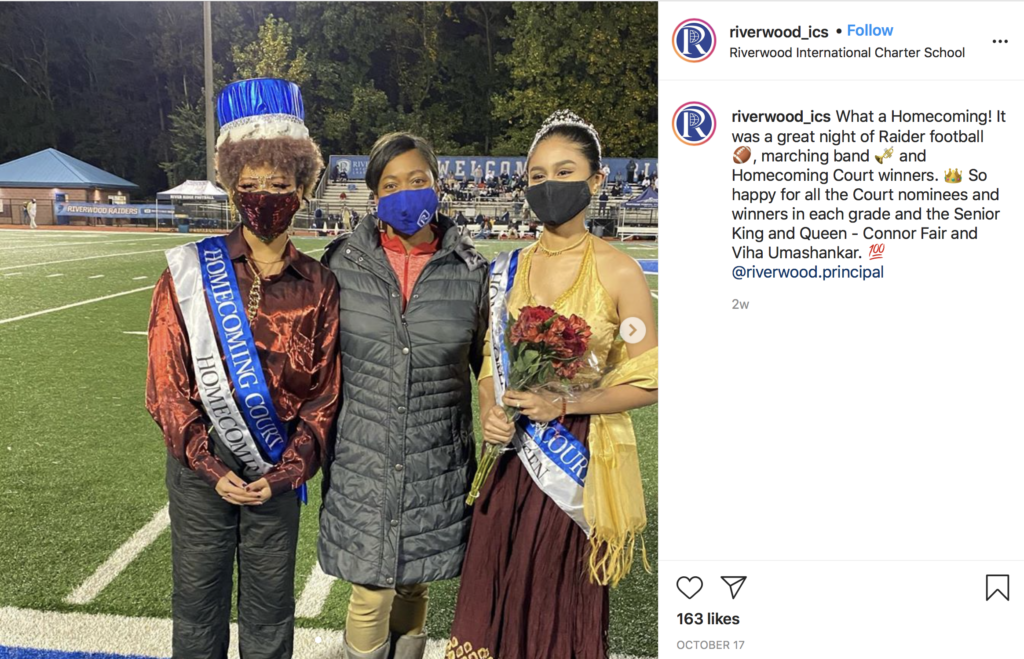 ‘Acceptance is here and now’

As far as society’s LGBTQ equality has come, not everyone at Riverwood embraced Fair’s gender identity.

“The overall reaction has been pretty mixed,” he said. “I get a lot of people who love and support me, some who are ambivalent about it, but there are also those who hate me for who I am. Certainly, I’ve had my fair share of transphobia thrown my way, from adult staff and students alike.”

Fair almost quit color guard amid insensitive comments about his gender presentation. He bound his chest to adhere to perceptions of how his body should look, he said. His ribs suffered, but his resilience endured.

“To those people who have made me feel less than human, my response is always that I’m valid, and that the time for change and acceptance is here and now,” he said.

That attitude and the Homecoming experience propel Fair forward through tough moments.

“It helps get me out of those days when my gender dysphoria is eating me alive and it helps me remember how valid I am,” he said. “I remember that I have the support of so many people who see me as a man and I should too.”

Beyond the personal stuff, the political implications of being Georgia’s first homecoming king are a little more elusive for Fair. He still has trouble wrapping his head around the broad ramifications, but it’s starting to sink in, he said.

“This marks the start of a period of acceptance and growth for even the most conservative of states, even if it starts at just one high school,” he said. “This win was not just for me. This is a win for the entire LGBTQ+ community. It is for every single person who is stuck in the closet, every person who has been misgendered, and every person who is still unsure of themselves.”

Fair is proud to make an impact on the larger community. He wants helping others to become the long-range outcome of his Homecoming experience. If people who hear his story come to accept themselves, his advocacy is worth it, he said.

“It can be hard to wake up every morning and know that the world doesn’t see you as who you are, but just for this moment let us all revel in this victory,” Fair said. “It is an acknowledgment of all that you’ve been through and all that you will become. I see you and I hear you, most importantly I accept you for who you are.”

“You are a king, a queen, royalty and you are more than what society labels you as,” he added. “No matter where you are in your journey, you are valid and you are loved.”

All dressed up with no place to go? Nu-Uh. It’s nowhere to go and all dressed up anyway!  Hoodies and sweatpants have seen too...
Read more