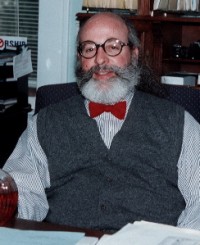 Several of the eight people arrested late Thursday in a raid at the Atlanta Eagle will remain in jail for a second night until they appear before a judge on Saturday.

Those arrested – a collection of four dancers and four employees of the popular gay bar on Pone – need a bond set before they can be released, according to Alan Begner, an attorney for the Eagle.

Bond for some of the men has been set and six remain in jail, but Begner (photo) says he will appear in court Saturday morning in the hopes that a judge will set bond for the other men. If not, Begner says, the men could remain jailed until Monday.

All eight men are charged with violating a city ordinance that regulates licenses for dancers. Begner, an attorney with a lengthy history of representing gay bars and clubs in disputes with the city, says he’s seen nothing like the raid that unfolded shortly before midnight Thursday.

“It is rare for people to be arrested at all [on a city ordinance violation] instead of being cited by a ticket,” Begner says. “It is certainly odd that a bond would not automatically be set for this offense. A few of them have bonds set but others, who are management or owners, have not. I am wondering if that was done on purpose by Atlanta police to further punish the owners for being gay. There is certainly nothing moderately typical about this.”

About 11:30 p.m. Thursday, more than a dozen officers from the Atlanta Police Department’s vice and narcotics squads raided the bar after undercover officers spent time inside based on a single complaint lodged with them a few weeks earlier. Police handcuffed everyone inside the bar as they checked identification and made arrests.

Patrons inside at the time of the raid have told media outlets, including Project Q Atlanta, that police acted inappropriately, yelling profanity at people inside the bar, forcing them to lay face down on the floor while handcuffed for more than an hour, joking during arrests and repeatedly asking patrons if they were married or in the military. Patrons also allege that officers made anti-gay and racist remarks during the incident.

Richard Ramey, one of the Eagle’s owners, calls the raid an “aggressive and vengeful” action by police. He says the bar is a good neighbor and in 13 years of owning it, he’s never had a problem with its liquor license or illegal activity.

“The way they came in here and what they did to people is an outrage,” Ramey says. “It reminds of things you would read in the Stonewall days. They were making racial comments, asking people if hey were married or in the military, there are reports of one officer saying he hates gay people. Talk about discrimination – I’ve never herd anything like this. It is absolutely crazy.”

Ramey was not at the Eagle during the raid, but arrived later to close the business and gather details about what happened.

“[Police] were so aggressive and so vengeful and so out to do something bad to people. They arrested eight people when you don’t even go to jail for that. You get a citation and go before the judge. Instead, they took them away in paddy wagons,” he says.

Ramey says the bar reopened Friday at 5 p.m. and will play host to a protest being organized for 5 p.m. on Sunday, a change from the original plan to hold the rally on Saturday. LGBT activists are calling on people to show up at the Eagle Friday at 8 p.m. as a show of support.

“The protest is something I am not planning, but something I fully support. The community is reaching out to us. It’s been a very emotional day. We’re getting calls form everybody. Everybody is outraged by what happened,” Ramey says.

Begner says he doubts the police department’s explanation that a complaint prompted the undercover investigation and raid.

“This is a most peculiar thing to single out a very well known club that has never caused a problem in this town. They harassed gay men and showed a force that was way above what was required. The only thing that was missing was masks,” Begner says.

The police department’s spokesperson has not provided details of the incident. The department’s LGBT liaison, Officer Danni Lee Harris, confirmed the arrests Friday morning but complained that she has not been provided additional details about the incident.