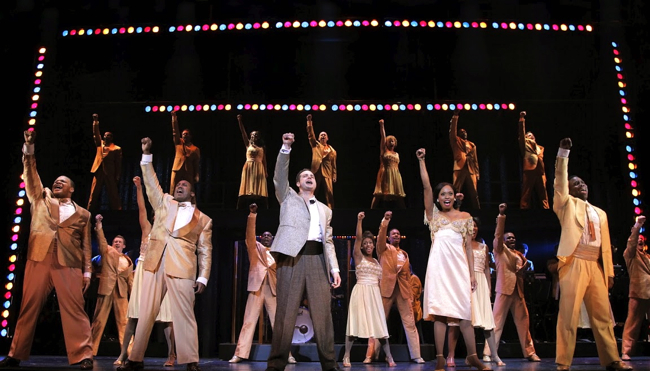 The big Tony Award winner of 2010 — the bouncy musical “Memphis” — lands in Atlanta on Tuesday as part of its national tour, featuring out former Atlantan Jody Reynard in the cast. 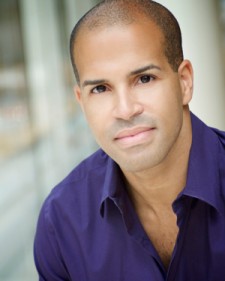 The winning musical hearkens back to the early days of rock and roll in 1950s Memphis. Huey Calhoun (Bryan Fenkart, top photo, center left) is a stock boy who longs to be a DJ. He goes to a party one night at an African-American bar and is impressed by the music he hears. He eventually becomes a DJ and strives to get the music he has grown to love on the air. Huey also takes a liking to one of the singers at the bar, played by another former Atlantan Felicia Boswell (center right).

Reynard (second photo) is originally from Austell, studied theater at Kennesaw State University, and moved to New York in 1999. While in town, he was involved with local companies such as Shakespeare Tavern, Georgia Ballet, Theater of the Stars and Atlanta Opera. He understudies the role of Gator and is part of the nightly ensemble.

“Gator is an interesting character,” the actor says. “He has experienced a tragedy in his life and has an impediment, but overcomes that. He has a lot of humor and emotion.”

Despite its lavish musical numbers, “Memphis” tackles important issues such as racism and interracial relationships.

“It is a time when rock and roll is about to emerge,” Reynard says. “It is before the civil rights movement and the relationship that Huey and Felicia start is taboo.”

The actor says that LGBT audiences in particular will enjoy “Memphis.”

“The majority of gays appreciate a great musical, and they’ll love this,” he says. “The story is great and the costumes and set is, too.”

Although “Memphis” is not his first touring show, it is Reynard’s first official national tour playing at the Fox. He thinks it’s fitting that he is in the show since he has been auditioning for it quite some time — six times altogether. “Memphis” was staged a few times before bowing on Broadway in 2009, and Reynard tried out for all those gigs. Still playing in New York, “Memphis” took home four Tonys altogether.

Reynard has appeared on Broadway in “Legally Blonde,” “Saturday Night Fever” and “Fosse,” where he was handpicked by Ann Reinking herself to be in the troupe. He was also in Boy George’s “Taboo.” There he met Rosie O’Donnell, who remembered him and invited him to be part of her televised song and dance number for Oprah Winfrey’s farewell tribute.

The performer feels blessed that he has never had to take a day job or a “survival” job to make ends meet in New York. He credits that to a “lot of luck, hard work and being in the right place at the right time.”

“Memphis” opens Tuesday and runs through two Sunday shows at the Fox Theatre. Get tickets.