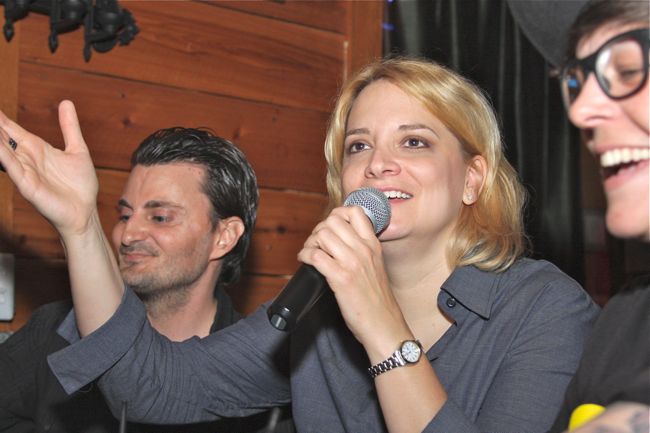 Atlanta’s favorite unemployed lesbian, Melissa Carter, isn’t shy about relaxing and kicking back since the end of her 10-year stint as the city’s only out radio host. Since turning off her mic, though, she’s carved out a niche as a celeb tweeter.

At least that’s what Fox News called her on Tuesday when it included her in a wrap of celebrities who touted their reaction to the Casey Anthony verdict on Twitter. For the record, Carter was not surprised.

No murder weapon. No motive. The law is not about emotion but evidence. I am not at all surprised.

Carter departed from Q100’s “The Bert Show” in April after 10 years on the popular morning show, surprising fans who wondered aloud about her next step. Carter never hinted at another gig, but has stayed busy keeping her nearly 10,000 followers up on what she’s not doing: running the Peachtree Road Race.

If “doing” means clapping along the sidelines, then yes. RT @livefierce @MelissaCarter Are you doing the Peachtree?

“Overheard my 6 1/2 year old saying to his friend, ‘do you know @MelissaCarter? She’s a singer. And she used to be on @TheBertShow, too.'”

To our delight, Carter’s not bashful, either, taking to Twitter to bash something we’ve all encountered: people ahead of you in line.

I am confused by people who don’t know what to order at fast food places. Not the first time you have seen the menu.

Carter has been mum on her next career steps since “quitting this bitch.” But does she desire something ala Simon Cowell?

She was among the judges for Project Cosplay at OutlantaCon in May and did a more “American Idol”-styled stint as a judge for a drag king during her farewell party with the lesbians at My Sister’s Room. The April event also raised funds for the Melissa Carter Transplant Fund, the non-profit established when Carter reached her five-year anniversary of her life-saving kidney transplant in 2002.

She also seems to fancy the idea of a reality show.

My reality show idea – One Room School. Build it circa early 20th cent, have it compete w today’s schools, and see who has higher

But career expectations seem to be on Carter’s mind of late. On Wednesday, she alerted fans that she’s “dipping my toe back into the workforce” on Friday. What could it be? Public speaker – at least that’s what she teased us with last month with this question on Facebook: “I need your help with a potential career choice by filling in the blank: I would pay to hear Melissa speak about _____.”

Fans didn’t hesitate to offer answers: Go back to Q100, organ transplants, LGBT issues, motor boating and being someone’s personal announcer when they walk into a room.

Really, though, she’s putting her thoughts into print and becoming a columnist for the GA Voice. Let’s hope she stays as tart and sassy in print as she is with 140-character tweets.