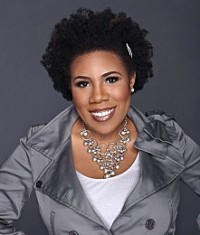 She grew up in Tennessee, but “American Idol” alum Melinda Doolittle is no stranger to Atlanta, either as a traveller or a performer. Win tickets to Saturday’s one-night-only performance.

The gay fave returns to Atlanta with her “Love 101” concert, on tap for Saturday at the Ferst Center. Read on to find out how you can win a free pair of tickets from Ferst and Project Q Atlanta.

Many people who watched “Idol” during Season 6 felt that the singer was robbed. An early favorite who was never once in the bottom three until her elimination week, she missed out on the final to Blake Lewis and eventual winner Jordin Sparks. Even former judge Simon Cowell later admitted he felt she deserved to win.

Yet the former back-up singer claims she took it in stride. She says what happens is meant to be. She is still friends with Sparks and is happy for her success, but she also calls “Idol” one of the “most traumatic, amazing experiences” of her life.

“I honestly believe the perfect thing happened,” she says. “I am very proud of what I achieved. It’s given me such opportunities to go places and perform.”

“It’s a fun show,” the singer says. “I really try to connect with the audience. There are some love songs, some Broadway and jazz, and some music from my last album. There’s also some sassiness.”

She has been compared to both Aretha Franklin and Tina Turner, and she feels both are the highest compliments she can receive. Critics have credited her powerful pipes and style with helping the R&B genre cross over to its next phase.

“I love both of them and what they do,” Doolittle says. “For me, I love music that energizes people. R&B is what I am categorized as the most. I like slow music, no matter what style. I sing from the heart.”

Doolittle has long been aware that she has LGBT fans in her audiences. She did a concert with Cyndi Lauper in the fall of 2009 at Feinstein’s in New York, benefiting the True Colors Fund and Broadway Impact.

“That was so exciting, to perform with her and be part of that,” she says. “The LGBT community has been one of my best audiences. I lay it all on the line. Maybe that is the connection. I think we all feel from deep down inside.”

And Doolittle loves coming to Atlanta.

“I came there a lot growing up, and I’ve been able to perform at several events,” she says.

No matter how busy she is, she finds time to keep up with “Idol.” She says she was not a fan of last season but has been enjoying this one.

“I don’t think it lost itself last year like some people have said, but I really like these new judges,” she admits.

Last year, Doolittle released a book detailing her experiences on “Idol” and what happened afterwards. The book followed her first album “Coming Back to Ya,” which was a critical success but not a commercial one. She is excited about the follow-up album she records later this year, although she admits she is taking her time to get it right.

Melinda Doolittle performs at the Ferst Center on Saturday, March 12. Visit them for more information and to buy tickets. Project Q Atlanta is giving away pairs of tickets to lucky winners. {encode=”[email protected]” title=”E-mail us to enter for free tickets”}. Put your full name in the body of the e-mail and “MELINDA DOOLITTLE TICKETS” in the subject line, and we’ll contact and announce the randomly-chosen winner on Friday.

UPDATE: Congratulations to Holly Clark and Frank Thomas on winning our giveaway. They each received a pair of tickets courtesy the Ferst Center.