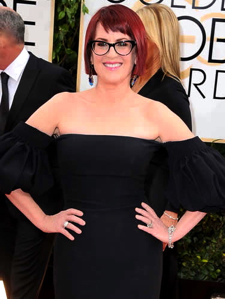 Count local reporters among those who’ll make any excuse to talk to the purveyor of the fab-iest, fag-haggiest TV character ever, Megan Mullally. The “Will & Grace” star catches gay Atlanta fans up on her life since Karen Walker, just as a next generation of fruit flies takes a second bow in town.

After wowing Atlanta’s LGBT film festival Out On Film on opening night back in October, “G.B.F.” (trailer above) returns triumphant on Friday for a limited run at the gay-run Plaza Theatre in Midtown. The movie, which follows a group of high school popular girls vying for the hottest accessory – a “Gay Best Friend,” also debuts on Video On Demand across the U.S.

It's a perfect opportunity for the AJC to snag 10 minutes with Mullally (photo). In addition to supporting her “Parks & Recreation” husband and several creative projects of her own, the actress takes a comedic turn in “G.B.F.” She plays an outed gay boy’s mother in a small but effective gay-adjacent supporting role. True to her talents, she winged her part. And it's an instant classic among Mommies Dearest: Mothers and Gay Sons on Film.

I thought it was a nice script. I thought the part was funny. I only worked for two, maybe three days. It was fun. I improvised a lot of the dialogue. I was watching the film ‘Brokeback Mountain’ with my son. I’ve seen the movie before. So I just pretended I was watching it and just went with it.

You should just go with it too. Follow that instinct to the Plaza and catch this cute flick.