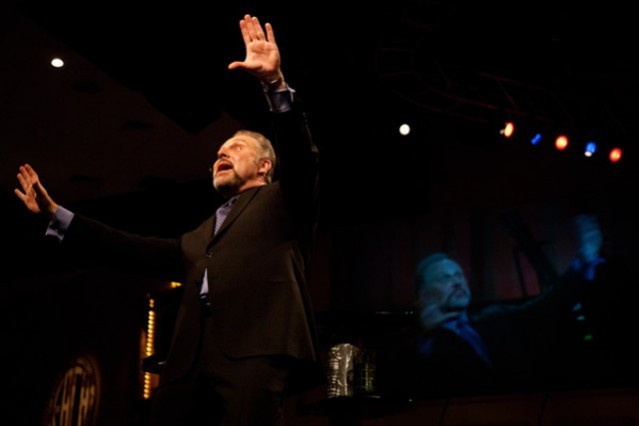 CNN, NPR and People came calling when local evangelical Jim Swilley came out. Two months on, Creative Loafing checks back as Conyers’ Church In The Now settles in, and as AfterElton names him the “bravest” of 2010. 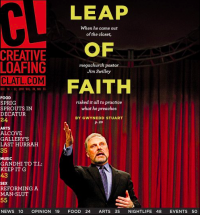 Perhaps most notable for laying his cards on the table without the push of a scandal, the married mega church leader (top photo) left even some gay audiences agog as he and his now-ex wife Debye laid not only his sexuality but their unconventional marriage agreement on the national stage.

The detailed, thoroughly investigated Loaf cover story “Leap of Faith” (second photo) includes mid-sermon quips from Swilley about his being gay, and some fresh quotes about the response he’s received from around the world.

The story also includes thoughts from Swilley’s laugh-it-off mother, his largely accepting congregation, and Debye, who still plays the doting wife after the divorce and recognizes that people are surprised.

According to Debye, Swilley was honest about his orientation for the entirety of their 21-year marriage. She appears prepared to answer the obvious question: Why would you marry a gay guy? “People ask, ‘If he’s gay, why did you marry him?’ I tell them, ‘There are tons of gay and straight people, couples, who are not intimate for whatever reason. It might be mental, physical, psychological, whatever.’ You have to understand, that was the only part of our marriage that wasn’t intact. Basically, the only reason to get married is if you can’t live without somebody. And that’s where we were at. We thought, ‘We don’t want to live without each other.’ Whether that’s crazy to some people or not, it’s really the way we felt.”

In addition to the local piece, Swilley’s story gets new life in the media world’s fascination with year-end roundups. Alongside the unsurprising coming out of Ricky Martin, Sean Hayes and others, Swilley’s revelation is called “the most unexpected and bravest coming out this year” in AfterElton’s “Gay Men Who Came Out in 2010.”

In what might be both the most unexpected and the bravest coming out this year, the Georgia mega-church pastor announced that he was gay in a sermon to his congregation.

Highly unusual for an evangelical leader, he wasn’t forced into the revelation by any tawdry gay sex scandal. He just felt called to do it because of the recent epidemic of teen suicides, particularly that of Rutgers student Tyler Clementi.

For the sermon that started it all, here’s Swilley coming out to his congregation in the October video that went viral: