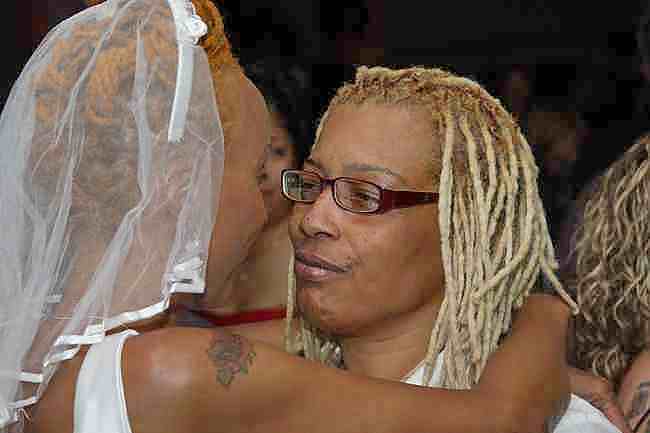 The Macon Telegraph wants to be clear: They are not a progressive newspaper, even if they will print your same-sex wedding announcement. They trotted out Georgia’s latest hate-monger to prove it.

Cue Rinda Wilson, Macon resident, chair of the Macon-Bibb County Board of Elections and clueless anti-gay bigot who would prefer to live in a theocracy ruled by uneducated conservatives. On Sunday, she penned an opinion column for the Telegrah – Making same sex marriage legal would harm society – to prove it.

As to society, most Americans will agree that the laws of a democratic republic such as ours generally represent a codified representation of the values and beliefs of the people, as allowed and constrained by the Constitution. Since the majority of Americans are religious people whose faiths have historically included tenets forbidding homosexuality as a practice that is sinful to God and detrimental to the personal and societal health of its people, the majority of America’s religious people would and do find the legalization of gay marriage abhorrent.

Move over, Tanya Ditty. You, too, Judy Manning and Sue Ella Deadwyler. You’ve got some competition to become Georgia’s Hater-in-Chief.

But Wilson is just getting warmed up. She goes on to blame gay men for HIV, argue that gay marriage will lead to sexed up high school students and that same-sex couples raising kids are unable to explain to their children that they have, well, same-sex parents. For shits and giggles, she tosses around the outdated and derogatory “gay bowel syndrome.”

So it is logical to assume that if gay marriage is universally legalized in America, those health risks unique to gay sex would have to be minimalized or suppressed in order to rationalize the legal sanction. Likewise, wouldn’t it be likely that all public school curriculum would have to gloss over those same health risks in order to present homosexuality in a favorable light to the students? Inevitably, legalization would expand what is already a very distressing practice in some school systems of indoctrinating young school children that gay families are identical to traditional families in all ways — a view that flies in the face of the personal moral code of many parents in America.

It’s little surprise that Wilson has donated to the Congressional campaigns of now-Sen. Saxby Chambliss and echoed his view in another Telegraph op-ed in 2010 that ending the military’s ban on openly gay soldiers would “bring on a number of serious concerns.”

Too bad that what’s taken place since the end of “Don’t Ask Don’t Tell” last year – a big collective meh from the military – has proven Wilson so wrong. Some might even say that she and Chambliss sit on the wrong side of history.