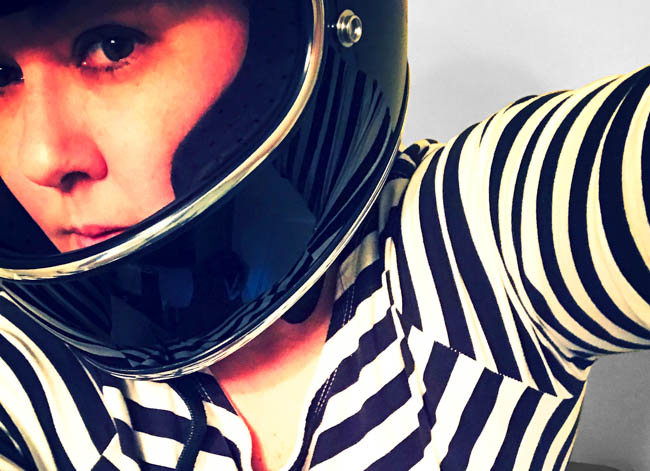 A legacy is not simply a thing we receive. It is something we build.

Regardless of our orientations, interests, identities, familial configurations, spheres of influence, or ages, everything we do reverberates generationally.

Legacies are how we live our lives. They impact the things that matter. They’re our contribution to the next generation.

Meet women who are legacy building in Atlanta, creating an epicenter of the queer women's community and feminist women's arts movements.

When I took Dykes on Bikes over, we were a bunch of bikers who showed up for Pride in the morning, blasted through the parade and were home by mid-afternoon. Always a crowd favorite, we didn’t have to try hard.

But what if we put some elbow grease into it? Well, we have. We’ve evolved. DOB is open to “any woman, any bike.” Dykes, bisexuals, queers, femmes, pansexuals, trans, poly, kinky and straight. We empower a community of diversity through relationships, rides, Pride events and education. And, of course, to recruit more women to ride.

The Femme Mafia – The Donna, Founder

The Femme Mafia is a grassroots organization dedicated to creating visibility and safety for femme-identified people within LGBTQ communities across the country. In 2005, founder Rachael Zoreena-Sheffield, aka the Donna, invited a small group of femme friends to dinner, and the Femme Mafia was born.

The Femme Mafia exploded, and where Femmes were once harassed and invisible in Atlanta’s LGBTQ bars, they are now recognized as powerful community builders. The Donna was honored as a Local Female Hero by readers of Southern Voicein 2007, and has been featured in Curvemagazine, The Advocate, and the book Femmes of Power.

Being sure of yourself begins with knowing your history, knowing your body, knowing yourself. The Atlanta School of Burlesque isn’t just teaching glamorous dances. They are creating a community of open-minded creatives who strive to find themselves while learning to move their bodies.

Through events like “Her HRC: Burlesque Through the Ages!” they celebrate Atlanta's LGBTQ women to build a greater sense of community while teaching the importance of engaging in the LGBTQ civil rights movement.

Ursula’s musical theater and dance background, and advocacy for body, sex and age positivity has made her a staple in the Atlanta burlesque scene. Known for her fearlessness of womanly sexuality, she sends her burlesque message to the world through storytelling and sensual movement.

She produces shows under Glittering Moon Productions. She heads, choreographs group numbers and creates graphics for The Candybox Revue. She is Co-Owner, Co-Creative Director and Instructor of Atlanta School of Burlesque, which is part of Metropolitan Studios. Ursula is a dedicated spiritual leader under training with The Wild Woman Project and leads full moon circles at Metropolitan Studios.

The Queen of the Subtle Tease, Talloolah is a burlesque performer, emcee and producer. She is Co-Owner and Studio Manager of Atlanta School of Burlesque and performs with The Candybox Revue. She started the #IamBurlesque movement, which showcases performers of all body types, abilities, ethnicities and experiences; and she produces DragonCon burlesque and Candybox Underground.

Talloolah speaks at conventions, leads panels and shows skillsets and how-to’s nationwide. Her classes and workshops make this form of expression accessible to enthusiasts and blossoming performers: sensual yoga, workshops, and beginning and intermediate choreography.

Co-Owner of Metropolitan Studios and The Atlanta School of Burlesque, Roula is known for performances that embody body positivity, sex positivity, self-love and sexual exploration. Roula is a troupe member, Production Manager, Sponsorship Coordinator and all-around cat herder with The Candybox Revue, as well as a community organizer and activist in the Atlanta arts scene. She pours her heart and soul into the Atlanta burlesque scene and works with individuals of all backgrounds and body types, preaching the gospel of self-acceptance and love.

We honor the legacy of the queer women, feminists, and artists who rebelled, organized and created before us by joining together and building on that legacy through passion, feminism, and solidarity.

VaVa Vroom is president of Dykes on Bikes®, Atlanta. Visit them on Facebook.

This column originally ran in Q magazine. Read the latest issue below.