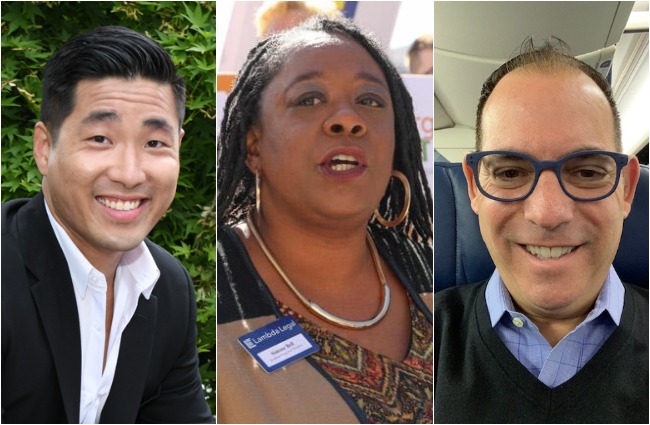 With just weeks until the November election, LGBTQ Atlantans are on the frontlines of #TeamBidenHarris serving as senior advisers, prominent campaign surrogates and delegates to the Democratic National Convention.

In Q Conversations on Friday, we’ll talk with three of those LGBTQ officials about their roles in the campaign, LGBTQ visibility at the Democratic National Convention this week, voter suppression and what LGBTQ voters can do to help.

The conversation will include Simone Bell, a former Georgia lawmaker who is now a senior adviser to the Biden/Harris campaign in Georgia; state Rep. Sam Park, who spoke at the convention on Tuesday, and Glen Paul Freedman, who is a longtime campaign operative, community activist and one of at least five LGBTQ Georgia delegates to the convention.

Join the live virtual Q&A on Friday, Aug. 21 by registering now. (The event is free but registration is required.)

Can’t make the event on Friday? Register and we’ll share a recording of the conversation you can replay later.

Bell is a senior adviser to the Biden/Harris campaign in Georgia. In 2009, she won a seat in the state House and became the first African-American lesbian to win election to the Georgia House or any state legislature in the U.S. Bell resigned in 2015 to lead the Southern Regional Office of Lambda Legal until 2018 and was chief external affairs officer for Planned Parenthood Southeast in 2019.

Freedman (photo right) is the CFO and COO for Fair Fight Action and Fair Fight, which promote fair elections and voter participation in Georgia and around the U.S. He served as the COO for the Stacey Abrams for Governor Campaign in 2018 and has worked with several other political campaigns and civic organizations. Freedman is a board member of OUT Georgia Business Alliance, Atlanta Pride Committee and Victory Fund.

Park (photo left) represents District 101 in the Georgia House. When he was elected in 2016, he was the first-ever gay man elected to the state House. Park, an attorney, is the legal analyst for Positive Impact Health Centers. He appeared in Q Conversations on July 10 with other LGBTQ elected officials in Gwinnett County.