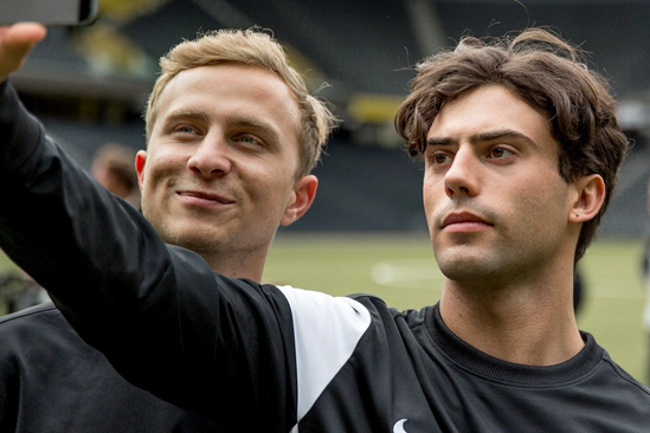 Bigger and better than ever, it’s filled on a daily basis with an assortment of serious eye candy for fans of the male and female forms. Hey, we’re only human.

The parade opened on Sept. 27 and continues running a whopping 11 days through Oct. 7.

Here is Project Q’s look at the festival’s 2017 hunks and hunkettes.

For a Out on Film roster and schedule, visit outonfilm.org.

When a former pianist – Jo Weil – finds a hunky guy (newcomer Pip Brignail) outside his apartment nude and handcuffed to a lamppost after his bachelor party, of course he brings him home in this unforgettable one-time night for both. Watch the trailer.

Laurenzo wrote, directed and stars in this warm romantic comedy with an all-star cast about a closeted young woman who brings her girlfriend home for the holidays. Laurenzo is expected to attend. Watch a film clip.

Camperchioli stars in the adorable short film “Femme” about a twentysomething who, after being shamed by an online hookup for being too femme, has to confront his own notions of masculinity and gender roles within the LGBT community.  Camperchioli will be in attendance. Visit the film site.

It has star wattage in the likes of Piper Laurie and Brooke Adams, but the heart of this family drama is a flashback relationship between young lovebirds Baldoni and Emily Goss. Watch the trailer.

“Gotham” star Cory Michael Smith stars in this highly-acclaimed look at a young man who comes home for Christmas during the beginning of the AIDS crisis. Watch the trailer.

When Billie (Cordileone) impulsively quits her job, she not only has to deal with finding a new one – and starting a company – but her wedding plans with her fiancé. Cordileone will be in attendance. Watch the trailer.

Mitchell Anderson and Kevin Spirtas in “After Forever”

Atlanta’s own Anderson returns to acting in this acclaimed web series, in which he and Spirtas play a long-term male couple who have it all – until they don’t. Both actors are expected to attend. Watch the trailer.

In Sao Paulo, a lonely nurse is hired by a wealthy woman to be the nanny of her unborn child. They begin a relationship in this dark gothic werewolf/fantasy.  Watch the trailer.

A gorgeous soccer star (Hubacher) begins an unexpected love affair with an equally gorgeous teammate (Altaras) in this sexy look at being gay in a macho sports world. Watch the trailer.

A Cast of Bodybuilders in “Man Made”

Directed by Atlanta’s T. Cooper, this film looks at transgender bodybuilding contest taking place in the ATL, with some sexy contestants. Watch the trailer.

“Man Made” screens Wednesday, Oct. 3 at 7 p.m. at the Midtown Art Cinema

A socially repressed young man – played by Menegat – comes out of his shell only when he is in front of a camera, when he strips naked and smears neon all over his body. Watch the trailer.

Sarah Mitchell, Travis Delgado and Caitlin Aase in “Two in the Bush: A Love Story”

Scarred by a break-up, Emily (Mitchell) finds herself drawn to both a man and woman who are – ironically – a couple. Mitchell and co-star Melissa DuPrey are expected to attend.

Janne Puustnen and Boodi Kabbani in “A Moment in the Reeds”

By the Finnish lakeside, two young men unexpectedly meet.   Leevi (PUustnen) returns home for the summer to help his dad and meets Tareq (Kabbani). a Syrian asylum seeker. They become friends – and more – in this romantic drama. Trailer.

Hannah Emily Anderson and Brittany Allen in “What Keeps You Alive”

Anderson and Allen star in this horror film about a female couple who go to a remote cabin to celebrate their one year anniversary – and one discovers the other is not who she says she is. Trailer.

“What Keeps You Alive” screens Friday, Oct. 5 at 7 p.m. at Out Front Theatre Company

This Victorian dramedy re-imagines the personal life of 19th century poet Emily Dickinson, played magnificently by Molly Shannon, debunking  the widely held perception that she was a reclusive spinster by showcasing her “hidden persona”: a lively and comedic personality who was romantically involved with her best friend/sister-in-law. Trailer.

“Wild Nights With Emily” screens at 7 p.m. at Out Front Theatre Company

He’s sexy no matter what he does. Paul Rudd plays gay here, matched by Steve Coogan as a bickering couple whose carefree lives are interrupted when a grandson enters the picture. Trailer.

Emmy nominee Matt Smith of “The Crown” exposes a lot of himself – physically and emotionally – as the groundbreaking photographer in this new drama. Read our Q magazine review and Mapplethorpe tribute.

“Mapplethorpe” screens Saturday, Oct. 6 at 9 p.m. at the Plaza Theatre

The Dancers of “When the Beat Drops”

Directed by noted actor/choreographer Jamal Sims, “When the Beat Drops” follows a crew of gay African-American men as they pioneer the Southern-rooted underground dance scene known as “bucking.” Created in the South, it was born as a response to being shunned from majorette routines, due largely to homophobia. Together with his crew of fellow gay African-American men, Anthony Davis- an Atlanta-born kid with a love of dance – helped grow bucking into a national movement, complete with fierce competitions, including an electrifying one that closes the film.

Sorry, folks. “When the Beat Drops” already screened during Out on Film Opening Night, and the local cast and crew were in attendance. See what you missed.

For a Out on Film roster and schedule, visit outonfilm.org.