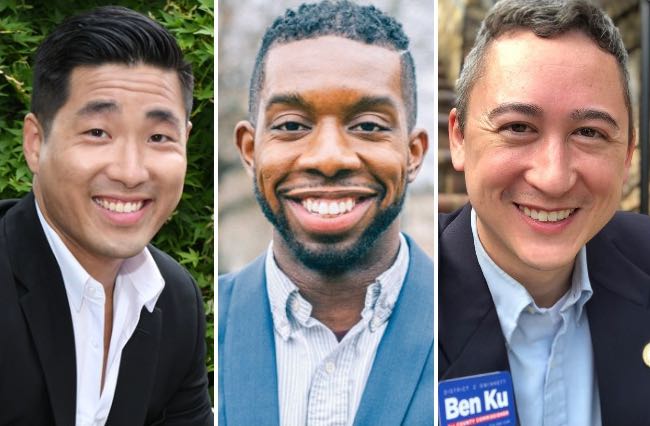 The state’s second-most populous county now has a minority-majority population with an electorate turning blue. The elections of Blair, Ku and Park also mean voters elected LGBTQ candidates to the school board, county commission and to represent them in the Georgia House for the first time in the county’s history.

How did that happen?

The next episode of Q Conversations – our live virtual Q&A series – will explore the historic elections of the three men and ask them how they navigate the changing political tides in Gwinnett, what they’ve accomplished since taking office, how they are helping their constituents through the coronavirus pandemic and the impact of the racial justice and equality protests in the county. We’ll also answer your questions.

Register for the July 10 episode of Q Conversations. (The event is free but registration is required.)

Blair (photo center) took office as the District 4 representative on the Gwinnett County Board of Education in 2019. In 2018, he became the first person of color elected to the school board – and its first openly LGBTQ member after coming out. Blair grew up in Gwinnett and later became an educator with experience in local, state and federal education policy. He is currently the Director of Program Development for UnboundEd, which provides resources and training for teachers and school leaders.

Ku (photo right) represents District 2 on the Gwinnett County Board of Commissioners. He was elected in 2018 and became the board’s first Asian-American and first openly LGBTQ member. Ku is a Georgia native and the grandson of Chinese immigrants who moved to Atlanta to help engineer the original MARTA heavy rail system. He has more than 20 years of entrepreneurial and software experience.

Park (photo left) represents District 101 in Georgia House. When he was elected in 2016, he became the first-ever gay men elected to the state House. He is a native Georgian raised by a single mother and his grandparents were refugees from the Korean War who moved to the U.S. in the early 1980s in pursuit of the American Dream. Park, an attorney, is the legal analyst for Positive Impact Health Centers.