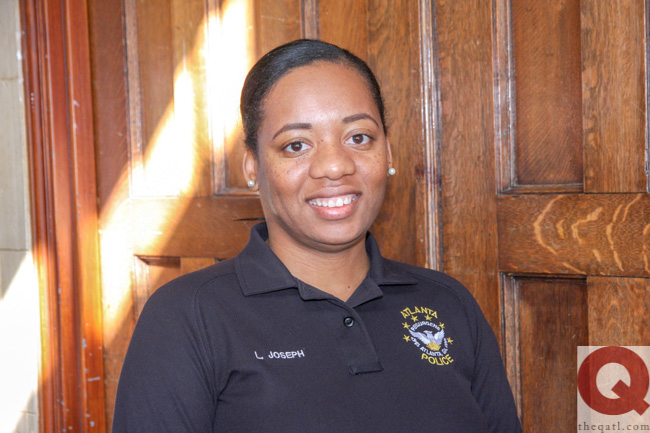 A nearly four-year veteran of the Atlanta Police Department was named as the agency’s newest LGBTQ liaison.

Officer Lynadius Joseph, who joined Atlanta police in July 2015, said she took on the LGBTQ liaison role because — as a lesbian — she relates with issues facing LGBTQ Atlanta.

“That along with the work that APD is trying to do throughout various liaison positions and just with our community policing unit in general as far as building relationships, repairing relationships where needed — I really wanted to be a part of that,” Joseph said.

She was introduced at a meeting of Atlanta Mayor Keisha Lance Bottoms’ LGBTQ Advisory Board on Jan. 11. Joseph was named to the new position in December.

Joseph — a Pasadena, Calif., native — started her career in marketing, then transitioned to police work.

“I’ve always had a passion for working with the youth as well as the community, even in my personal life as far as different advocacy groups. That led me to policing,” she said. “Some of the things that were going on in the country at the time — I thought about change from within. So, I applied with the Atlanta Police Department and pretty much hit the ground running.”

Joseph said that spending time on Atlanta’s streets as a beat officer allowed her to start identifying areas where she had a passion.

“Being at Little Five Points, I witnessed a lot of homelessness. I was able to interact daily with the LGBTQ community and see some of the issues going on there as it relates to crime,” she said.

“Thankfully APD — being such a large department — has a lot of areas where you can merge your career goals with your passion in the community and still be effective within the department,” she added.

Joseph takes the place of Officer Courtney Mack, who left the department in July 2018, according to Atlanta police spokesperson Officer Jarius Daugherty. Joseph joins Officer Eric King, who has been the department’s LGBTQ liaison since 2014.