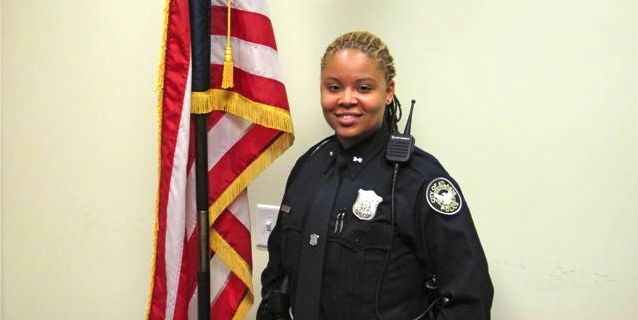 A seven-year veteran of the Atlanta Police Department is now the agency’s newest face of its effort to better serve the city’s LGBT residents, getting named on Wednesday as one of its gay liaisons.

Knight, a lesbian, joined Atlanta police in 2005 and has patrolled in Midtown’s Zone 5. She most recently worked in the department’s Community Liaison Unit, which is commanded by Deputy Chief Renee Propes, who is the agency’s most senior openly gay commander.

“I’m looking forward to this wonderful and challenging opportunity to serve as a link between the LGBT community and the brave men and women of the Atlanta Police Department,” Knight says in a prepared statement. “As a proud member of both the gay community and the APD, I will take great pride and care in ensuring we continue our mutual respect and understanding. The LGBT liaisons are instrumental in helping foster those partnerships that are at the core of our mission here at APD.”

The agency has made significant strides in repairing its relationship with the city’s LGBT residents since the botched Eagle raid in 2009, including revamping its polices and procedures thanks to a lawsuit, a trio of public forums, recruiting LGBT officers, a plush offensive, and sharpening the process for the LGBT liaisons to be notified of cases. Chief George Turner says Knight will continue that work.

“We’ve made great strides in strengthening our relationship with the LGBT community and I expect Officer Knight will keep up the great work already done by SPO Powell and Officer Sharp,” Turner says in a prepared statement.

Propes commended Powell for her work as an LGBT liaison. Powell is moving to the department’s Background & Recruitment Unit.

“SPO Powell took the job at a difficult time in APD’s history, and has served honorably and admirably,” Propes says in a prepared statement. “The community has come to respect and trust her, and the department is better-trained and more aware of LGBT issues thanks to the work she and Officer Sharp have done.”