The only thing missing from the “RuPaul’s Drag Race” Pit Crew of red-hot underwear models was more of it. True to what the fans want, RuPaul doubles its membership size and subsequently the size of our appetite for its members. So to speak. 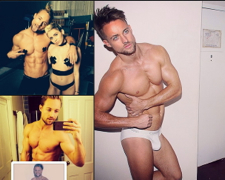 The Season 6 supersizing – watch their best bulges in the season premiere above – comes with a bonus gift from Ru: a “too hot for TV” web series called “Oh Pit Crew” for some more private-time ogling action (video below).

The dirty little additions to the crew are Simon Sherry-Wood and Miles Davis Moody (top video image, left-right). The two new specimens of manmeat join series regulars Jason Carter (not that one) and Shawn Morales to serve package and faraway stares alongside the show's competing queens. Gay Atlanta’s own Trinity K. Bonet took advantage of them best on set.

The Pit Crew’s first hot beef injection, Sherry-Wood, is a “Real World Paris” housemate who’s been preparing for his Debut de Ru by modeling nude and nearly nude all over the world. You quite simply have to follow him on Instagram right now (top photo). Yup, that’s him with Miley, Heidi Klum and more. And yes, he’s sexing up the Twitterverse too.

His sexy new cohort Davis-Moody (second photo) has been swinging his hammer at everything that moves as well. Davis-Moody is bedroom-eyeing Instagram, and he also kisses and tells: Here he is talking about how Ru hand-picked him for the job. You may know him better as JHud's stud or "This Boy is a Bottom."

Note that the original Pit Crew aren't taking the up-and-comers lying down. Morales still loves to show off and just landed the dirty-hot cover of Frontiers, and Carter keeps busy booking your private affair when he's not stripping down for cameras.