Meet the men who would be queen of ‘Pageant’ 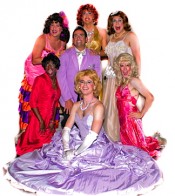 Local actor Dustin Lewis not only stars in the show but is one of the producers. He was involved with a production of “Pageant” in Chicago and wanted to help stage a version in Atlanta soon after he moved here. Although it has been performed locally before, this is the first professional production, he says.

“Pageant: The Musical” (photo) closely follows the real deal–with six contestants and their mandatory interviews, talent, swimsuit and evening wear competitions. The “catch” for us is that the women are all played by men, and most of the performers are in fact gay men.

The performer says Miss Great Plains is a simple girl, albeit inexperienced in this level of competition.

“She is super sweet and loves everyone,” Lewis says. “She is very excited to be here. She is very close to her mom, and they actually competed in a mother-daughter pageant together, but this is the first pageant like this she has participated in.”

Ironically, Lewis just got through playing a polar opposite character–that of womanizing Bobby in Stage Door Player’s “Company.” He says that it has not been easy learning to navigate singing and dancing while wearing heels, but he says the cast has gotten to the point where “their toes aren’t numb anymore.”

Emcee Frankie Cavalier leads us through the evening, and different judges from each night’s audience pick winners, so it is conceivable that a new contestant could win on different days of the week.

Yet the show isn’t just a takeoff on pageants. It’s also a full-fledged musical, beginning with the flashy number “Take a Look/What a Night” with all the beauty queen wannabes.

“Pageant” is directed by Tony nominee Bill Russell, who co-wrote the show for its early ‘90s off-Broadway gig. Russell says that although “Pageant” is campy, the actors take their characters very seriously. Russell, who met Lewis when they worked together on the Chicago production, says he has been pleasantly surprised at how little pageants have changed over the years–and the devotion some fans have for them.

As he and co-writer Frank Kelly were readying the show, he found a gentleman who was basically a pageant encyclopedia. The gentleman had the Miss America pageant on videotape from 1969 on and knew offhand who did what talent-wise each year.

“This was before the internet, and he was a pageant aficionado,” Russell says.

Russell looks forward to the show stopping in Atlanta, where he feels gay men and women will eat it up.

“Pageants are bigger than life, and they have a certain camp appeal,” he says. “I’m excited to do this down here. Atlanta is the Southern capital of pageants.”

He directed a London production of “Pageant: The Musical” at the King’s Head Theatre, which later transferred to the West End. It received two Olivier Award nominations and won the award for Best Supporting Performance in a Musical.