Meet the man behind ‘Protect Your Monster’ 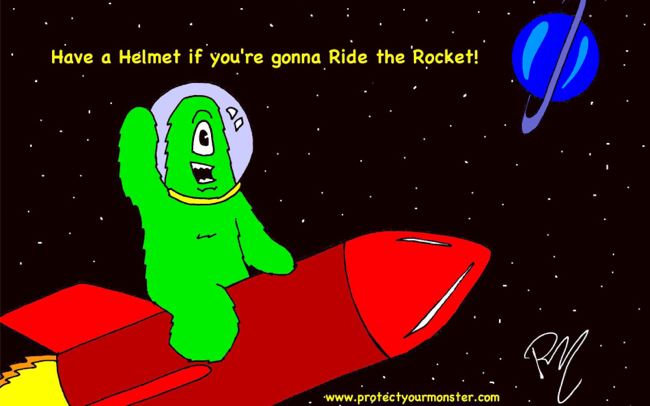 If you haven’t yet seen Richard Marshall’s sex-positive “Protect Your Monster” comic series, get in on the growing local phenomenon and get to know the do-gooder as his books get ready to take over the world of safer sex. 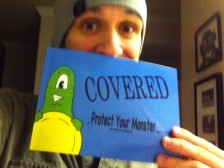 Many may know Marshall (second photo) better as one of the cute bartenders at gay dance club Jungle. (You may recognize him from the bar’s many theme parties in our photos here, here, here and here, to pinpoint just a few.) Marshall credits the bar for fully supporting his “monsterous” project, helping him make valuable connections, and fueling his attitude of community involvement through the charity groups that hold regular events at the bar.

“I consider myself lucky to work for an establishment that works so closely with the community,” Marshall tells Project Q Atlanta. “I’ve been with the Jungle family for years, and have enjoyed every minute of it. It’s just an added bonus that they have supported my message.” 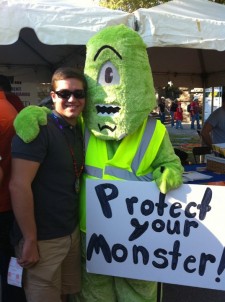 For the uninitiated, “Protect Your Monster” follows Harry the one-eyed monster – wink wink, nudge nudge – who always wears his raincoat or other protective gear. Individual strips (top photo) have been running in David magazine since 2010. You may have also even seen Marshall himself dressed as Harry the Monster (bottom photos) at Pride and the AIDS Walk.

The strips, bumper stickers and other paraphernalia are kid-friendly enough with their puns and imagery, but meaningful and funny enough to reach the adults who really need to get the message in a non-threatening way.

“Sex is fun. Sex is meant to be fun,” Marshall says. “But so often HIV prevention is such a heavy message that there was a disconnect. I wanted to make something that makes allusions towards the issue in a way that would be funny, creative, and could be a springboard into those important conversations.”

Now Marshall is taking “Protect Your Monster” to a wider audience with recently released e-book and paperback editions of his favorites on Amazon. The paperback will soon be available at Brushstrokes, too.

We sat down with Marshall to get the full story and learn more about the man and his mission.

What motivated you to start the project? 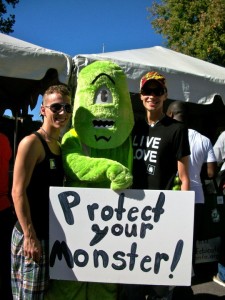 My friend Joey Johnson (A.K.A. Knomie Moore of the Armorettes) was the one that got me motivated to turn the character into a platform to talk more about HIV/AIDS prevention and awareness. I want to focus on our personal responsibility to get tested, know our status, and regardless of our status, take preventative measures to protect ourselves and the one we’re with.

I’ve met so many amazing people in Atlanta who have dedicated themselves to the cause and work tirelessly to stop the epidemic, spending time with them and listening to their stories was what made me passionate about the message.

How does “Protect Your Monster” give back besides in its message?
I have always been impressed with the work that so many non-profit organizations do in Atlanta, and have been fortunate enough to work with some of them since the conceptualization of the comic. As a small thank you for all they have provided me and all they do for the community, a portion of the profits will be donated to AID Atlanta’s Gay Mens Outreach, Positive Impact’s M.I.S.T.E.R. Project, the Atlanta Sisters of Perpetual Indulgence (Order of the Flaming Sugarbakers), and the Armorettes.

What kind of feedback are you getting?
I’m always amazed when I have random people come up to me and tell me how much they’ve enjoyed it. I even have a wonderful Brunel University professor who has been kind enough to promote the message in London, and everywhere his academic travels take him. Since I have been able to collaborate with a lot of great organizations, it lets me know that there is an appreciation for the work. It’s a very humbling experience.

What is your ultimate goal for “Protect Your Monster”?
The main goal is exposure and getting the message out there. I’ve collaborated with so many amazing groups. Partnering up with the CDC, or getting a PSA that would reach across all demographics would be ideal. I am looking at the possibility of establishing a non-profit some time in the future. The non-profit would focus on providing resources (safe sex kits, funding, materials) to smaller organizations and groups that could benefit from it, while also highlighting the work of already well-established organizations and resource centers. The non-profit would be a huge undertaking, but I’ve got a few amazing people who have offered to help me when we are ready to clear this hurdle.

I’ve had a few posters of PYM comics that have popped up around Atlanta. Maybe one day I can get one up on an Atlanta billboard. Pretty soon you’re not going to be able to avoid looking at my monster.

What about you are people usually most surprised to hear?
In the past I was a cyclist and crew member for a cross country bike ride called Journey of Hope, which is an annual event/fundraiser for Pi Kappa Phi’s non-profit, Push America. I think it might also surprise people that I am a very shy person.

I’ve lived in Atlanta for almost 10 years now, before that I attended school down in Americus, Ga. I credit a lot of my passion for community involvement to my parents, who have been amazingly supportive, and time spent in my college fraternity, Pi Kappa Phi. I was initiated as an openly gay student and was given the opportunity to lead as our chapter’s philanthropy chairperson, and one year as the chapter president. I think it gave me the opportunity to break a lot of stereotypes about being gay, and also proved that this was not a “stereotypical fraternity”.