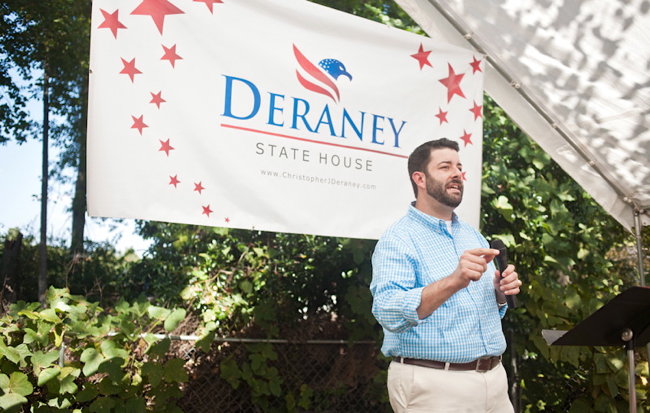 A gay Republican and former opera singer hopes to unseat a Democrat incumbent in a district that leans Democratic on his way to becoming the first openly gay man elected to the Georgia House.

It's an uphill battle for Christopher Deraney, who is not only running as a gay Republican in a most unlikely place – District 78 includes portions of Clayton and Henry counties – but he faces the unfortunate reality that gay men fail more than they succeed in winning office in metro Atlanta.

But Deraney is no stranger to tough battles. A car crash in 2011 left him seriously injured and he spent two months recovering in Grady Memorial Hospital. The injuries helped end his career with the Atlanta Opera. So the 33-year-old Deraney is up for the political challenge.

"It's a situation where folks in my generation have gotten to a point where they are fed up. It crosses all political parties and all walks of life," Deraney says during an interview on Tuesday. "I am a resident of this district, too, and if I want it to get better for me and my family, I have to take a vested interest in it."

But even with the political and demographic challenges facing Deraney, his campaign is gaining traction. On Monday, Georgia Log Cabin Republicans, a gay political group, endorsed him.

“The Georgia Log Cabin Republicans are delighted and proud to endorse Christopher J. Deraney for Georgia State Representative for District 78," GLCR President Jamie Ensley says in a prepared statement. "As the Deep South’s first openly gay Republican to run for state legislature, Mr. Deraney recognizes that liberty is a right that every individual should enjoy, including our gay and lesbian citizens."

'Cards stacked against us'

Deraney announced his campaign in October, but his fundraising has lagged. He raised $975 in the campaign disclosure filing period ending March 31 and has just $231 on hand. His opponent, state Rep. Demetrius Douglas, raised $300 in the same period, though as a state lawmaker he is prohibited from raising campaign cash when the legislature is in session. He has $11,030 on hand. The two men do not have primary opponents so they will face one another in the Nov. 3 general election.

Deraney says he knows his campaign is a tough sell in the district, but that he brings the perfect mix to help shake things up politically. In town hall forums and meetings with residents, Deraney says voters are itching for a change.

"There are cards stacked against us. We weighed every factor and the timing of coming out on a broader level. It is going to be a very tough race. But they are ready for someone, anyone, to come in and start doing some work for the citizens of this county and this district. We've been very encouraged by the responses we've been getting," he says.

Deraney describes himself as a "modern conservative Christian" on his campaign website while also being up front about his position on "equal rights":

In America, it seems we have come to the tipping point. Is it just that the freest people on the planet relegate themselves to different corners and not extend the freedoms of one man to another? That’s not the America envisioned and realized in our governing documents. America, as free as it is, doesn’t deserve to be hypocritical any longer — from one free citizen to the next.

I believe it is the duty and obligation of our elected officials to start closing the gap and promote equality as a fundamental human right and a basic principle of social justice. I believe that our lives begin at conception and our equality does not stop at skin color. Your gender, your age, your origin, your sexual orientation, should never be the reason you are denied basic liberties and rights.

The future of our nation is depending on us to start standing together, side by side, hand in hand.

Deraney says his religious background, a staple of his childhood, fits in well with the legislative district. The area includes several large churches, including First Baptist Jonesboro, which counts Truett Cathy as a member. That's the founder of Chick-fil-A, whose son and current CEO Dan Cathy was embroiled in controversy over the company's giving to anti-gay causes and his own anti-gay comments.

"It is a conundrum. I am a gay Republican, but I am a Christian," says Deraney, who adds that he knows the Cathy family. "We were raised to appreciate being conservative people, but that doesn't necessarily mean clamping down on any kind of fanatical ideology." 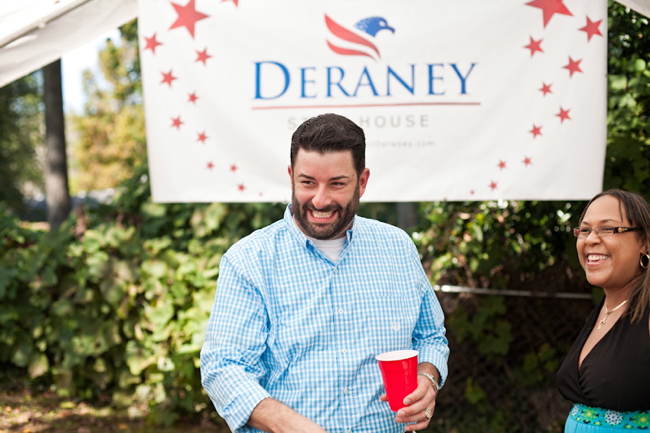 Deraney also says that a gay Republican lawmaker can help speak some LGBT truth to a party that often relishes in homophobia and anti-gay legislation. The state party, he says, is steeped in anti-gay views that don't match the more equality-minded approach of younger Republicans like him.

"A gay Republican is someone that could really benefit Georgia and the Republican party itself," he says. "You don't back down and you show them that we are here to stay. It is going to take some time for the state Republican party to realize we are just like everybody else and they have to be inclusive of everybody."

But if Deraney reaches the state House – something no openly gay man has done – he faces a Republican majority that blocks efforts to pass a measure protecting LGBT workers in state jobs from employment discrimination, bans gay marriage and backs "religious freedom" legislation that critics say opens the door to anti-gay discrimination.

"Though I am a conservative, I am also an openly gay men who wants to get married one day and I would appreciate being able to do it in my home state. While a lot of people in this state value their conservative ideals and upbringing, it also puts me in a position that wants to see everyone be equal," Deraney says.

He adds that he backs a recent call to recognize in Georgia gay marriages performed elsewhere and an end to the state's constitutional prohibition against gay unions. He also does not support the "religious freedom" bills that erupted into controversy during the recent legislative session.

"We should protect business owners, sure, but we need to make sure it doesn't open the door to more discrimination in the process. I will not support something that will give people the tools to openly discriminate. It's a fine line in that bill. It would have to be worded carefully," Deraney says.

Deraney, who does social media marketing and customer relations for a small business that provides construction equipment rentals, says that he would support a "religious freedom" bill that offers more precise language. Critics of the measures in Georgia said the bills could negate LGBT-inclusive protections put in place by cities across the state.

"That bill could open the door to more uncertainty and discrimination," Deraney says.

If he wins, Deraney would become the first openly gay man – and gay Republican – elected to the Georgia House. State Rep. Rashad Taylor came out after being elected and lost his re-election effort in 2012. Three current state lawmakers are openly gay – state Reps. Karla Drenner, Simone Bell and Keisha Waites – and are running for re-election.

But gay men find it tough going to win a seat in the General Assembly. Gay politico Ken Britt, Timothy Swiney, Tim Riley and ex Marine William Phelps all tried – and failed – in 2012. This year, Deraney is one of four gay men running for the General Assembly – Kyle Williams for the Senate, and Bob Gibeling and Randy New in the House.

"It is shaking things up to throw a gay Republican in the South, especially being the first one to run on this level. We really want to see being a conservative not a bad word but being inclusive of everybody," Deraney says.