Meet the gay former teacher running for Atlanta School Board 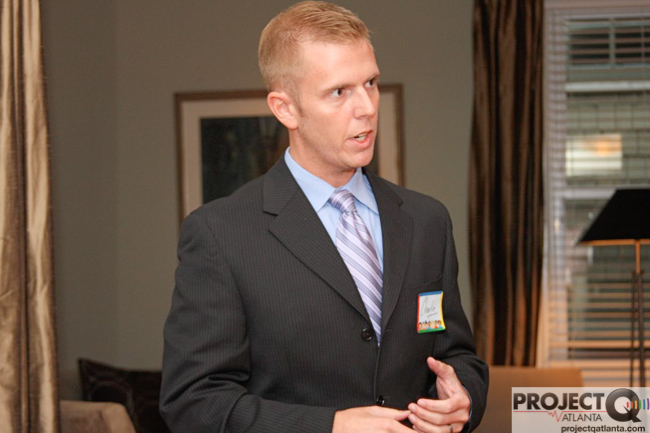 Gay former teacher Charlie Stadtlander is taking a second shot at the Atlanta School Board, this time hoping to unseat an incumbent for an at-large seat.

Stadtlander, 37, is a former elementary and high school teacher in DeKalb schools, where he worked for five years. He ran for office in 2009, first for the Atlanta City Council and then unsuccessfully trying to unseat an incumbent for the District 3 seat. When he announced his latest campaign in July, Stadtlander was again targeting the District 3 post. But earlier this month, he changed races and now is challenging Cynthia Briscoe Brown for the At-Large Seat 8 post.

Stadtlander’s platform is split between addressing budget issues ­– including the property taxes residents pays to fund schools — and highlighting the education policy reforms he plans to champion, like addressing what he said is the district’s over reliance on harsh discipline policies as well as reducing bullying in schools.

Stadtlander, a Midtown resident, is president and CEO of his own consulting firm, Stadtlander and Company. When he first ran for office in Atlanta, he had to account for a stinging rebuke of transgender people and drag queens he made as a college student and official with a Log Cabin Republicans group. Stadtlander raised the issues unprompted during a recent interview, again expressing regret over the comments he made in 2005.

“I want to acknowledge I said some things that were hurtful, inappropriate and completely wrong. And I had I grow up to realize that,” Stadtlander said.

Stadtlander also pointed to one of his campaign co-chairs, Shelley Emerson, a transgender woman who helped him evolve his views.

In July, Stadtlander took part in a march and rally in Midtown to support transgender Atlantans. During the event, he was assaulted and robbed.

Stadtlander said being a voice against bullying will be a crucial piece of his campaign. He said the school system’s anti-bullying policies exist on paper but are not always fully enforced in schools.

“[I want it] known that we are going to be holding the board, the superintendent and administrators accountable for implementing the anti-bullying policy in an effective and fair way,” he said.

Stadtlander will also use his campaign to raise awareness about bullying during Atlanta Pride in October.

“While each of these groups have unique challenges, they all have one challenge in common, which is that they are being bullied and tormented and are afraid to go to school. And so we are going to be working our tails off in October to correlate with Pride month, to raise awareness and to get out that the message that we have to have a safe and welcoming learning environment,” Stadtlander said,

Stadtlander also spoke extensively about property taxes and the school system’s budget. As he explained it, the APS budget has increased drastically but results have not.

“The Atlanta Public Schools’ budget has increased significantly since 2009, almost double. And yet our performance has not. So that’s a huge difference [between 2009 and now]. This is obviously not a money problem, this is a how we are using the money problem,” he said.

Stadtlander added that, while it’s a “moral obligation” to fund schools, it’s “ridiculous” that those funds aren’t being used effectively. He said taxpayers believe they have a moral obligation to fund public schools.

“But what I don’t believe they support is, you know, paying ridiculous amounts of money in property taxes to a school system that is not giving good results,” he said.

Fulton County recently froze property appraisals at 2016 levels after public outrage over tax bills that saw double-digit increase. The increase in property taxes will now be phased in over several years.

Noting the budget increases since 2009, he said, “That to me is an eight-year experiment that shows we have spent a lot more money and yet we are not getting better results.”

Stadtlander has $57,550 in cash on hand, according to recent financial disclosure statements, including $50,000 he loaned the campaign.