Gary Harrell’s path to elected office goes through a three-term incumbent Republican in a conservative north Georgia county. But this gay Democrat is up to the challenge. The resident of downtown Rome in Floyd County enjoys a challenge. He’s helped launch the Rome Stonewall Democrats, organized young Democrats and worked with state Democrats. Now he wants to unseat an incumbent and become what’s got to be the first openly gay Democrat on the Floyd County Commission. And he isn’t afraid to throw a toga party to raise campaign cash. Harrell ran unopposed in the primary last month, a sign that it’s not a friendly area for Democrats. His opponent, Garry Fricks, knocked off a single challenger in the GOP primary for the Post 2 seat. Harrell and Fricks face off on Nov. 6. We talked with the 27-year-old small business owner about politics, being a gay Democrat in north Georgia and what LGBT supporters in gay Atlanta can do to help. 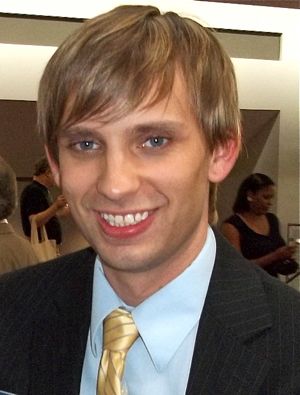 Give us the rundown on the basic biographical factoids. I just turned 27 this past June, I reside in the beautiful downtown Rome area of Floyd County and I’m single. I do a variety of things, I love working with people and meeting people from all over. I’ve worked campaigns all over the U.S., including many here in Georgia. I recently started providing web development for small businesses, nonprofits, candidates for office and Democratic organizations, which led me recently to start my own small business called Turning Blue. Turning Blue is a one stop shop for all things internet related primarily for political campaigns. What prompted you, a young gay politico, to run for office in conservative north Georgia? And why the county commission? New Leadership! That’s why I’m running for public office for the first time. It’s time that we gave the citizens of Floyd County an option. Someone that is young, dedicated and will bring new ideas to Floyd County. We need new leadership here in Floyd County, and I will bring that to the table. I decided to run for County Commission because I want to put Floyd County back to work, and by being on the board of commissioners, I can help see to it and rally to bring new industries and jobs here in Floyd County. You didn't face primary opposition for your county commission race. Did you push other candidates out of the way or is it such a conservative area that candidates don't run as Democrats in the county? I’m the first Democratic candidate to run for this post in over 12 years, which is the first time Mr. Fricks has had any opposition. It’s time for Floyd County to have an option. Has being gay come up in the race? Do you expect it to now that the primaries are over? It has been mentioned on online comments on articles from the online Rome News Tribune and recently been mentioned by a local media outlet that I’m the first openly gay person on the ballot in Floyd County. No one has really made a big deal of it, yet. I have faith the citizens of Floyd County will vote on the issues and for new leadership, not my sexual orientation. I just happen to be gay. What's your plan for the campaign? How much will it cost to fund your effort? How is campaigning gong? I plan on running a true grass roots campaign to get elected. The voters want new leadership, and I’ll bring that. I believe in the values of fiscal responsibility, balanced budget, supporting small business, and making Floyd County the best place for business and families to call home. I want to modernize our local government services. I think that my hard working team will put me over the top in regards to fundraising. My campaign is going pretty good, it was slow during the primary, but has picked up into high gear just in the past week. I’m looking forward to having conversations with all my fellow citizens in Floyd County over the next couple of months. Why should LGBT folks outside Floyd County tune in, care and pay attention to the campaign? Some people may choose to step outside of their local community to help a campaign for a candidate who is fighting an important battle. I hope that people reading this story will see that what I am working for in northwest Georgia – innovative government services, thoughtful economic development and listening leadership – is worth supporting! What can LGBT folks outside Floyd County do to support you and your campaign? I welcome everyone to come be a part of my campaign team, no matter where you are. I even have a friend in New York who just recently started making phone calls on my behalf. Technology erases the traditional geographic obstacles. I plan on having several big canvassing days to where all my friends and supporters outside of Floyd County can come over and help. I always welcome contributions as well at garydharrell.com.