Meet the gay Democrat agitating for change in South Georgia 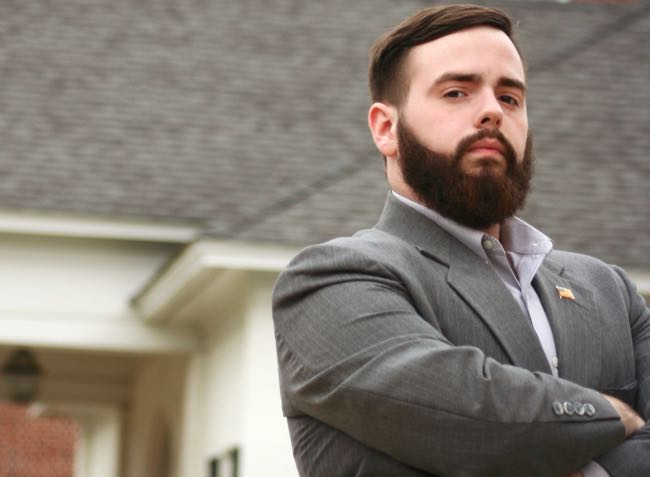 The young gay Democrat and party activist targeted by a former Georgia lawmaker last year over his “lifestyle” hasn't slowed down since the controversy, setting his political ambitions high and hoping to make a difference in his South Georgia hometown.

Andrew Niquette, a 19-year-old Albany resident, is running for the Georgia General Assembly next year, hoping to an unseat a longtime incumbent. But he's set his eyes on higher office and is building his political resume, including a trip to the Democratic National Convention last year and working with the campaigns of Bernie Sanders and Hillary Clinton.

Niquette was pulled into the public eye in December, when former Rep. John White denounced him in an email to leaders of Georgia Democrats after White learned of Niquette's bid for a seat with the county party.

He recently talked with Project Q Atlanta about talk politics, life in South Georgia, and his plans for the future.

I got my start in politics because of Bernie Sanders. I was very inspired by him and his platform and what way he wanted to take America. The time came when I was trying to figure what exactly I could do to be involved.

About two weeks before the election for delegates [to the Democratic National Convention] I decided to run, and I campaigned, and I won. I honestly, I didn’t expect to win, I wasn’t even thinking that it was possible for me to win, but I did win. And it was very overwhelming. It was an overwhelming feeling.

What’s your relationship to local politics after what happened during your county party race last year?

One of the things I really wanted to be involved with was local politics. I wanted to really get involved to really help out my own community, my own town. I am very thankful that I have all the experience I have now to be able to actually help my community.

It’s a bit frustrating now because I am one of the only ones doing what I am doing in Southern Georgia. You know there aren’t many people trying to change things.

One of my main goals now is to try to change local politics here and to try to get more people involved in all ways. Especially now, to get people to understand that equality doesn’t really stop at a certain race or a certain religion or a certain ethnicity.

Albany is a fairly large town, I believe the area is 120,000 people, maybe a little bit more. It’s an extremely diverse area, it’s predominantly black. I think it’s around 60-something percent African Americans here in Dougherty County. It’s a great, really amazing town. But one of the only things is the elected officials here aren’t really involved. At all.

That’s one of the major issues here is that we have politicians here who aren’t involved. And the only reason they keep getting re-elected is because they run unopposed. Which is why I decided to run in 2018.

But overall, I love Albany.

In Georgia politics there is an Atlanta versus everywhere else mentality. But often, Atlantans don’t know much about that ‘everywhere else.’ What are some aspects of Albany that you wish people understood?

Albany in Dougherty County is very far away from Atlanta, but yet it’s one of the most safe Democratic areas that there are in the entire state. So Albany is kind of like a nice island of blue in a whole entire sea of nothing but red. And again, we’re not such a small city, 120,000 people is not a small amount of people. It’s a lot and it makes a difference.

I think there is a lot to be said about how people in Atlanta are and how people who stay in Atlanta are. People do think that Atlanta is the superior part of Georgia and people think that they can all stick to Atlanta and that they can, you know, just throw all their resources into Atlanta but neglect the whole entire rest of the state and it’ll be completely fine. And I think the [Democratic] Party itself has a lot to do to get out of Atlanta and get into the rest of Georgia.

That’s why Democrats lose so badly, is because they are so stuck in Atlanta and they are scared kind of to move out of Atlanta.

Why are you running in 2018 and what do you see as being the key issues?

I am running against Rep. Winfred Dukes from District 154, and Rep. Dukes has been in the House for 20 years. And he’s run unopposed for the majority of that time. And Winfred Dukes has really done absolutely nothing for his district at all.

One of my main issues is going to be the economy here. While we have a major population here, southwest Georgia is still home to the highest rates of poverty in the entire state, and is also one of the most economically disadvantaged areas in the entire state.

Another focus of mine is going to be equality. There’s only so much I can do as one person in terms of LGBT rights and civil justice and everything, but I will make sure to make that a major point in my campaign.

So things are moving at a very quick pace for me. If I am elected in 2018, I’ll be the youngest person to ever serve in the Georgia General Assembly.

There’s a lot of confidence from a lot of people that I have a chance of winning that race. I don’t know what to expect out of it, but I guess what vote I get will determine what I do next. But my plan is to run for the state House in 2018 and if I don’t win this time around, I’ll be running again in 2020. And then I do plan on running for the House of Representatives, for Congress. That’s a goal. And then my end goal, I guess, would be to run for Governor of Georgia one day. I think that would be a good stopping point for me.