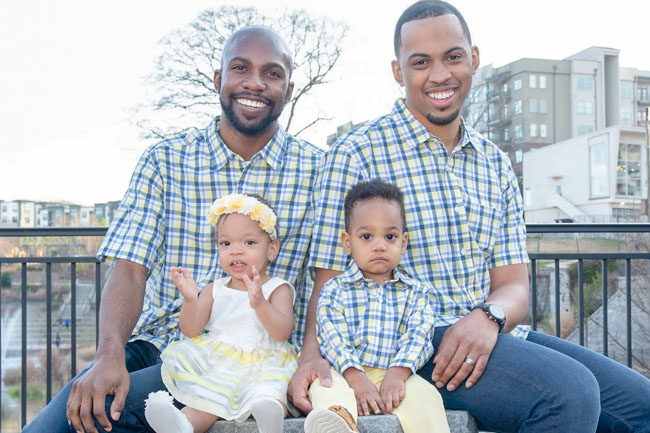 When South Atlanta couple Terrell and Jarius Joseph agreed to be on the rebooted reality TV show “Wife Swap,” they weren’t expecting to be paired with a religious family with eight kids.

But that’s what the couple, both 26, got on the episode, which aired April 25. It made them the first family with black gay dads to be featured on the show.

“It was definitely rocky to put it lightly. There were definitely some teachable moments,” Jarius (photo left) told Project Q Atlanta. “It took us to really having to get to breaking down the walls between us and coming to an understanding of each of our walks of life.”

The Louisiana natives met as college freshmen when Terrell was at LSU and Jarius was at Southern University. They moved to Atlanta, and later married in January 2017.

Both wanted kids, but a surrogate had a miscarriage in 2015. Then they had two surrogates pregnant at the same time, and Ashton and Aria were born in October 2017.

The couple has built a large following on social media, with over 27,000 subscribers on YouTube and 160,000 followers on Instagram. That got the attention of a “Wife Swap” producer, who reached out through Instagram about “a really exciting opportunity taking place in Atlanta,” according to Terrell (photo top right), who works in human resources at Stanley Black & Decker. Jarius is a sales executive at Salesforce

“Initially when you get something like that, you’re like, ‘What kind of scam is this?’” he said. “They were revamping it, bringing it back. They wanted to do more non-traditional families and spin it that way. She talked me through it and I immediately called Jarius and told him about it.”

For the show, Terrell received a frosty reception from the dad, Matt, when he switched places with the mom, Nina (watch below). Terrell called it “one of the scariest moments for me almost ever.”

“They let you walk though the house first,” he said. “I’m seeing it’s a Christian home and a Caucasian couple and I’m like, ‘Oh my goodness, they’re instantly going to judge me.’”

It got tense between Nina and Jarius. Nina said that being gay is a sin, but the two were able to talk it out.

“How is it okay for me to tell someone you’re not worthy of my love because you love a person of the same sex? That doesn’t seem fair to me,” Nina told Jarius during the episode.

“It was definitely a controversial episode,” he said. “At the end of the day, we took on religion and it made a lot of people feel uncomfortable.”

Terrell said they went into the experience wanting to prove that they’re not that different from everybody else.

The couple said they would love to have their own reality show.

“Our goal is just more representation, seeing more people like us and being positively represented on TV and having a platform to share our life struggles as well,” Terrell said.

In the meantime, they’ll continue reaching people through social media.

“For us having kids, we really wanted to capture growing moments with our kids, so we get the best of both worlds by vlogging it, and our Instagram is about us growing as individuals and us growing as well,” Terrell said.