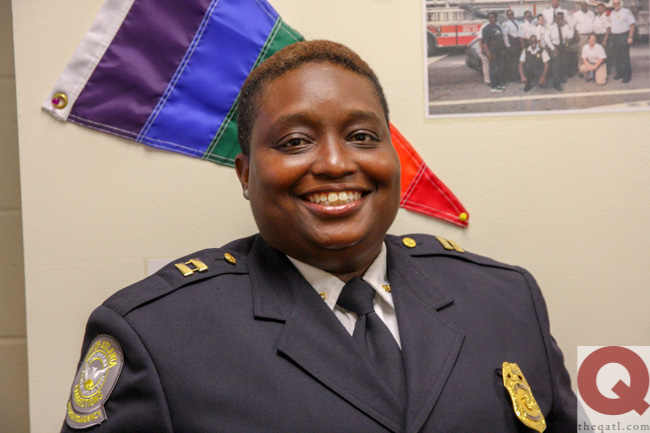 Capt. Kamula McKnight-Butler’s official title is day watch commander for the Atlanta Department of Corrections. But she’s sometimes better known by her other role: the city’s first LGBTQ Corrections liaison.

The position was created in 2013, when a former LGBTQ liaison for the Atlanta Police Department, Officer Courtney Murphy, would invited McKnight-Butler to the unit’s events. APD’s current liaisons are Officers Eric King and Courtney Mack, and the Atlanta Fire Rescue Department named Firefighter Anaré Holmes and Lt. Latia Posey as liaisons in 2016. Mayor Keisha Lance Bottoms named Malik Brown as City Hall's LGBTQ liaison in May.

“I said, hey you know, we need that at the jail,” McKnight-Butler (top photo) said during an interview with Project Q Atlanta inside the Atlanta City Detention Center. “I went to my chief and he was so ready and open. He was like, ‘I trust you. Go for it.’”

McKnight-Butler said there have been generational challenges with the position.

“No one loves change,” she said. “But I’ve been lucky to have the personality to welcome questions, so I would say my hardest thing was getting people in older generations to understand and accept some of the things.”

“I think my biggest accomplishment is that I have so many people that understand, and they actually want to learn and they’ll ask questions,” McKnight-Butler said. “And that’s a good thing.”

Transgender detainees: 'I let them guide me'

The detainees held at the Atlanta City Detention Center are in for minor offenses, including traffic incidents and disorderly conduct.

“With corrections, we see all types of people here,” McKnight-Butler said. “So it’s better to get in front of a situation than be behind it. So having a liaison, a welcoming face for the LGBTQ [community], is always a good thing.”

That includes staying in front of an issue that’s come up more frequently in recent years: housing transgender detainees. In June, the American Medical Association adopted a policy urging correctional facilities to allow prisoners to be housed in facilities consistent with their gender identity, and to cease the use of administrative segregation and solitary confinement based on transgender status.

McKnight-Butler said the city's detention facility approaches the issue on a case-by-case basis.

“The transgender population that comes through here will tell you [they're transgender] because they want to be protected,” she said. “We have a personal, private conversation with each transgender detainee that comes through, and our main concern is safety, security and how they view themselves if they should have to be housed. We do not segregate depending on their genitalia or anything of that nature.”

The detainee will be asked where they feel safest being housed, and then McKnight-Butler or the supervisor on duty will decide from there based on the safety of that person and other detainees.

“They’ll tell me. I let them guide me, and I will house them appropriately,” she said.

Transgender detainees are not typically put in general population, which houses between 54 to 72 detainees. Rather, they are put in a male or female restricted housing unit, which houses 20 to 25 detainees.

But if the detainee decides they would rather be in general population, they will be given the opportunity to shower alone and they will be offered a housing unit near the supervisor’s front desk. McKnight-Butler said this is all standard operating procedure for the department.

The Gainesville, Fla., native has risen fast since arriving in Atlanta six years ago after serving in the U.S. Army. She started as an officer, was promoted to sergeant, skipped lieutenant and went straight to captain. And she’s not done rising through the ranks, if she has anything to say about it.

Were she to do so, she would join Atlanta Police Chief Erika Shields, who quietly came out last year and became the department’s first-ever openly lesbian chief. Shields, like all top officials from Reed's administration, submitted her resignation to Bottoms, but the new mayor has yet to accept or reject it. Bottoms was one of only two candidates to pledge to keep Shields when the question was posed at a mayoral forum hosted by the Atlanta Gay & Lesbian Chamber of Commerce last summer.

Wherever McKnight-Butler lands, she plans on continuing to be an ambassador for the city’s LGBTQ community.

“I teach people in my inclusion and diversity class that this is not a lifestyle — this is our life,” she said.