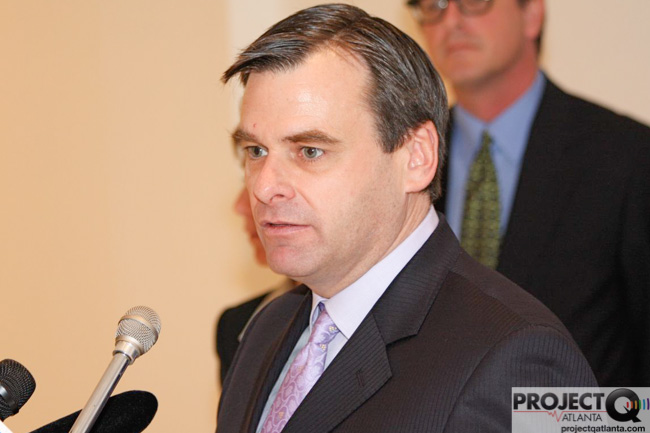 The gay Atlanta lawyer who recently scored a groundbreaking win for the rights of LGBT people in the workplace in the Midwest is now focused on securing a similar victory for a Georgia lesbian who was fired for being gay.

Greg Nevins, the Employment Fairness Project Director in Lambda Legal's Atlanta office, argued before the 7th Circuit U.S. Court of Appeals in November that a lesbian college instructor in Indiana, Kimberly Hively, was wrongly fired for being gay. The court includes Illinois, Indiana and Wisconsin.

Workplace discrimination based on sexual orientation violates federal civil rights law, Nevins argued. It was the same argument he used a month later before the Atlanta-based 11th Circuit U.S. Court of Appeals when he argued that a Georgia employer wrongly fired Jameka Evans for being gay. That court includes Alabama, Florida and Georgia.

Nevins won the Hively case earlier this month, just a few weeks after a three-judge panel in the Atlanta court ruled against Evans. Nevins and Lambda have since asked the full 11th Circuit court to hear the Evans case – a move similar to what happened before Hively won her case.

In the wake of the decision in Indiana and the appeal in Georgia, we talked with Nevins about the cases, what led him to the legal profession and what's next for the Lambda attorney.

What are some of the biggest misunderstandings people have about civil rights law?

What have been your experiences working civil rights cases, especially LGBT related ones?

I’ve found it actually to be very satisfying. You know how important what you are doing is. And, in some ways, on some level, you’re kind of a beneficiary of it I guess, depending on what exactly it is that you are doing. But you feel as though you are doing something for your community and it’s been very rewarding.

You were one of the lawyers that got involved in the Eagle raid case. How did you get involved with that case?

Dan Grossman started the case, he was the one who was there from the get go. And then he said, “Hey, I think Lambda Legal should be a part of this.” And I was eager to join it. And I thought it was important that something get done.

What made that case feel important?

Well I think that somebody had to, the police department had to know that that was not okay, to do that. And so it couldn’t go unaddressed, there had to be some accountability for what happened. It couldn’t just be seen as though that that was ok, basically.

The thing is that you usually can’t go into this kind of position right away, that’s the way it works. So, I spent a lot of time in a law firm, and that’s just the way it works. These jobs aren’t usually available to somebody right out of law school, so I did other things.

How did you get into law in the first place?

I’ve always been interested in political things. And then when I actually took a law class as part of my business degree, it was the most interesting class I had. A lot of people thought I’d be good at it, and so I just went with it. And I definitely, it definitely was the right fit for me.

How did you end up working for Lambda Legal?

It’s been great. Like about a year out of law school I applied for a job way back in 1990, I didn’t get it, I didn’t come close to getting it. I kind of just assumed that I wouldn’t be getting that kind of a job. But then, you know, like 10 years later I was getting ready to leave San Francisco, and there was this job in Atlanta. And I’m from the South, and I was kind of interested in moving back. And it all worked out great.

What’s it like being an out gay man doing work on cases related to LGBT civil rights?

It feels natural and logical. I certainly respect the people who are in our organization and other organizations who are not LGBT, who are straight identified and who are great colleagues who do the work. But it seems natural for someone who is openly gay to want to do this.

There seems to be a lot riding on your work. How do handle that?

Well, you know, you hate to lose, but you understand that some of it is part of the process. But even in cases that I’m doing now, you pretty much have to lose before you can eventually win. That’s not typical. But the first couple courts are going to tell you “no” before you get to one that tells you “yes.” You have to be patient. You have to see the big picture as much as you can. But it can be challenging.

A few weeks ago you submitted a brief in the Evans case. What was that about?

Why does that make a difference?

What happens now that you won the Hively case?

Now we just have to win in other places, we need to roll out that win and make it happen in the 11th Circuit in the Evans case and you know wherever else there are cases up at the circuit court level.

What’s it like arguing a similar case in another circuit?

Does it ever get frustrating having to make the same argument before other courts?

Well you have to consider what other movements have had to do, and we can’t really, we cannot complain about – obviously any delay in progress and justice is unfortunate – but we have to, by the same token, look at the amount of progress we’ve made in a relatively short time. We have to keep that in mind.

A bill to provide minimal employment protections to protect LGBT state employees was introduced by Georgia lawmakers. Any predictions on the likelihood of it passing?

You know I never know. I mean the last state to do that was Utah, and who would’ve guessed that? And there’s a whole bunch of other states that one would’ve thought would have done this by now and they haven’t. So it’s hard to hazard a guess. Which is kind of why I do what I do. I wish all the people who do the legislative work the best of luck, but I want, if we can get a parallel track to get protections, so that we can get them either through the courts or the legislatures.

What’s next for you and your work?

The next thing is to try to get the 11th Circuit to try to do the same thing as the 7th Circuit did. And try to get as many other circuits as possible to, to just really get employment protections recognized in the LGBT community under existing federal law nationwide.