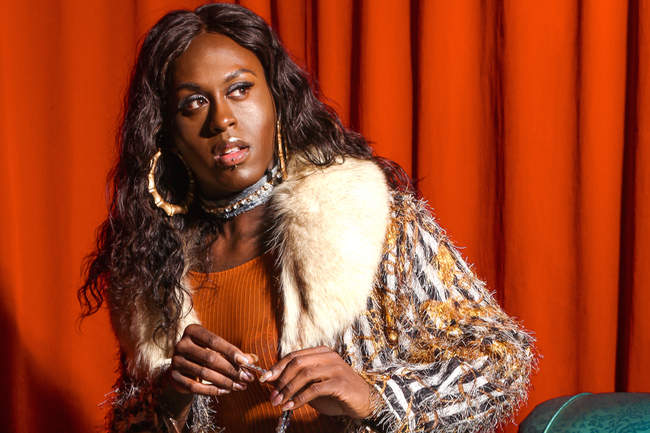 As Atlanta gathers officially and unofficially on March 31 to celebrate and commemorate International Trans Day of Visibility, including a week of events leading up to a TDOV Roundtable Summit with Solutions Not Punishment Queering Reproductive Justice with SPARK on Saturday, and Friday's Trans Day of Visibility Event wth Trans Action Georgia and Georgia Equality, this week’s photo essay chats with six transgender and gender non-binary Atlantans.

While capturing their essences with light, we ask each one to enlighten us on their journey, and to offer advice for other trans people who may be on rough roads, as well as what cis folks can do to help smooth their paths.

“I’m an artistic queer activist, who wears his heart on his sleeve while creating art on any canvas.”

The first time at 16, I was unfortunately was outed as gay, then came out as trans on my own terms around 23.

What can cis folks do to be better allies?

Help to bridge the gap between just knowing and understanding queer culture. Never assume anyone’s gender or identity. Train yourself to use more gender neutral vocabulary.

What advice would you give young trans individuals?

See your transition one tree at a time, not the whole forest. Celebrate every victory, even if it’s small. Keep a mentor/ friend close, ask for help if you need it. Don’t feel pressure to fit the mold of what you see as “perfect.” Everyone’s journey is different.

My pride is so proud

My talent is extraordinary

And my style is so divine

I am the darkest of berries

And always the sweetest of wine

I always make sure to spread love wherever I touch

Hey when life throws you lemons

Georgia southern peach until the day I die

“I’m just some trash kid from a trailer park making his way in the city. I'm very scatterbrained and aloof, sometimes reckless, but I haven’t had a boring day in years. I’m a drag artist named Mystery Meat, and that's kind of my love and drive in life at the moment. I love being immersed in queer culture and in a space that’s often about celebration. I love the sense of family I've built because of it.

It took me a lot to realize I was trans, because I didn’t want to be trans. I was really conflicted about my gender identity. My mother kept drilling me about my sexuality, which was difficult for me to explain to her without explaining my gender. So I kinda took a dive and started telling her and others that I was a guy. And I found myself to be a lot happier, so I continued down that pathway. Dysphoria aside, I’ve never been happier with myself.

Listen to us! The amount of frustrating conversations and arguments that could've been diffused had cis folks just shut up and listened to us. And quit asking the same simple ass questions every time. Especially out at the bars. It’s not my job to educate you while I'm out at the bar trying to have fun. … If you can call a cis drag queen “she” all day, then please don’t act like it’s such a struggle to call me “he.” I don't buy your plight. Sorry. Get good or go home.

Do whatever you need to do to protect yourself and your energy. Be kind to yourself, because the world is going to try to kick the shit out of you. It's not going to be easy, but remember that your happiness is worth it.

“I've been a lot of things, but right now I work in tech and love it. One of my goals is to pioneer technology that promotes values relative to social justice and equity, and develop accessible resources that are specific to the success of trans journeys. Right now I'm just getting my feet wet, so it'll be a while. I also write occasionally, but most of my free time is spent scouring thrift stores for crop tops and detangling my hair.”

I made the decision to come out when I decided to stop being shitty to myself. Best thing I ever did!

Cis folks have a laundry list of things they can do to be better, always. A good place to start would be showing empathy when appropriate and treating trans folks as people first and not like a test to see how awesome your politics are.

Prioritize your safety above everything, and take care of yourselves while never making excuses to forget that you matter. Be brave but mindful, learn about what we're up against, and be as brilliant as you want to be so you can beat it. It's not an intuitive thing to consider, but caring for your own well-being will always be the best defense to your misery becoming someone else's bottom line.

Put your pronouns in your bios, dating profiles, on your name tags at events – everywhere! Also never assume someone's pronouns. It's always better to ask us in a very polite manner than say “They/Them” to someone who strictly identifies as he or she. It takes a lot of effort for trans people sometimes to present their gender. And be OK with people's pronouns changing.

You are automatically worthy of love and respect. Don't let anyone tell you that you have to earn it all the time. Trans people are revolutionary because we breathe and exist in spite of cishet white supremacist patriarchy.

Speaking of – the only political party that has made me feel at home as a worker but most importantly as a trans person has been the DSA. If you're going to be a queer and/or trans person, you're already eschewing cis heteronormative modes of being, why not also eschew the very system that endangers trans people the most?

“I’m a 24-year-old self-proclaimed “bombshell” from a small town in the Blue Ridge Mountains of Virginia. A true southern belle. After three years performing in night clubs, I had a nervous breakdown fueled by an alcohol and cocaine addiction, and am now transitioning for the second time, starting my journey to sobriety. I have walked away from club entertainment claiming I am not a “drag queen” and never really was. I’m a small-time vlogger documenting my journey to sobriety and MTF transition. I’m a mental health awareness activist encouraging everyone to ask for help if they need it. #SeeSomethingSaySomething”

Steps that cis folk can take to be better allies are quite simple. Treat us like human beings, because that is all we are.

Educate yourself. Learn from your mistakes; don't keep making the same ones. Take care of yourself. Go to the doctor. Do it right. Practice the same kindness you would like from the world. If you're sad, talk about it. Don't try to suppress your feelings. They're there for a reason.

This article originally appeared in Q magazine. Flip through the digital version below, and pick up a new issue each week.