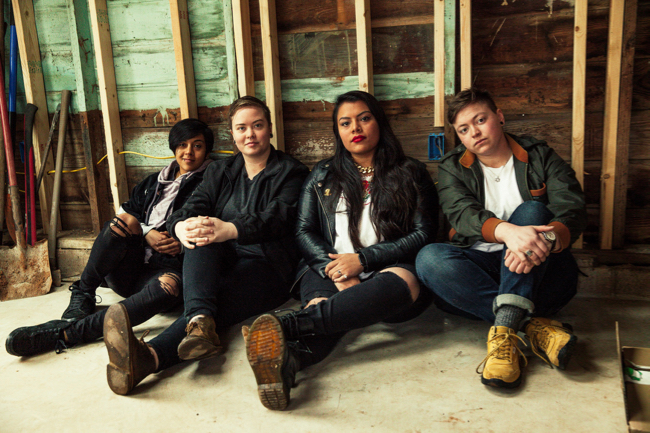 From Hip Hop to House, Rock to Electronica, Techno to Synth Pop, local creative souls, chat about their music, and get their thoughts on Atlanta's scene and their place in it.

Photos and interviews by Jon Dean for Q magazine.

Spotify, Apple Music and iTunes and other streaming services

“Latinx people aren't celebrated enough in film, music and TV, and when they are, a lot of times they’re forced into a stereotype. I want to recognize brown girls and POC, because there are few times I see people that look like me playing music and taking up space. It’s important because representation leads to pushing boundaries, and also being able to relate to something. Is like finding a home.” -Maritza

“Atlanta has changed quite a bit over the years. It's become a more inclusive place, but it's not anywhere close to being where it needs to be in terms of representation of queer folk, POC, and women. We are happy that we have found our home here, but we realize there is still a lot of work that needs to be done to help our community. This means having more representation through members of bands in the scene, but also for more queer folks, POC, and women to feel comfortable and safe coming out to shows.”

“I’m a queer Hip-Hop, Rap artist, with a passion to kill close minds and splash rainbows over mainstream media.”

“The Atlanta music scene is what you make It. My advice is to be yourself and don’t let anybody steal your shine. Have your own sound and look, and fly to the top.”

“I'm a producer and touring DJ, and my music is influenced by the things I love the most about music and club music mixed with my personal sensibilities and energy.

“Atlanta has an extremely black and queer and creative young music scene that encompasses so much more than just our mainstream, and it's unfortunately at danger of being snuffed constantly due to racism and gentrification issues that plague ATL to this day.”

“Support anything that you possibly can that is being created by our talented young queer black & POC community, including events curated by Morph ATL, Oye.Fest, SFQP, FWM Ent, countless queer and DIY events and spaces, and many others.”

“I am an artist, technician, and producer of all sorts. AGYN is my solo project in which I make electronic music using Ableton, midi controllers, several instruments, and my voice. I also run an underground electronic label and rave, GNR Sound. My music, performance, and raves are a way to bring healing to myself and others via communication, dance, sound, and radical self expression.

“The national press has yet to catch up with all the amazing, experimental, and progressive pockets of musical development happening in this amazing city.”

“Until recently, I produced mainly house and techno music, but I decided to venture out and showcase my skill and love for orchestral and ambient music. I’ve had a few people dub my music as ‘video game music,’ which I’m honestly flattered by.”

It’s more than just an indie/punk/emo music scene. Not to say that there’s anything wrong with that, but Atlanta has so many different views of music and so many people wanting the showcase what kind of music they love and their interpretations of it. If you’re willing to step out of your own musically comfort zone you’ll discover a whole new world of great sounds and artists in this city.

“I’m a non binary performer in the musical theater scene and lead singer of Good Judy. When I perform with various theaters across town, I strive for them to break from the norm, frequently performing in traditionally female roles. With Good Judy, we’re creating purpose-driven, fun, queer themed synth pop.

Our music scene is incredibly diverse. I’m constantly meeting performers of all genres, and I’m always inspired by their work.