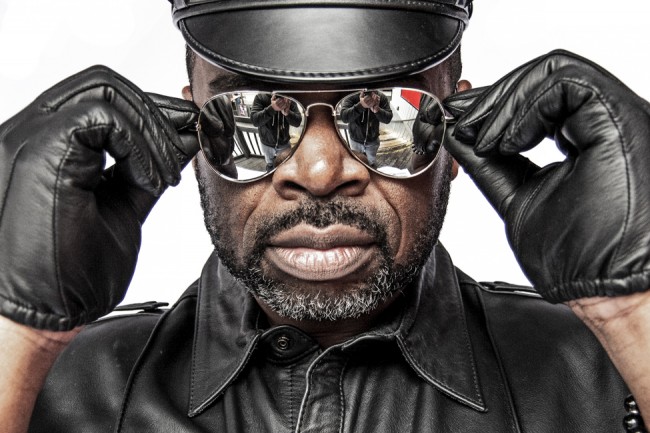 When Merlin started going to the Onyx Southeast bar nights at Atlanta Eagle about 10 years ago, he was drawn in by the happiness of the group’s members.

“There’s something about a man of color owning their sexuality that’s freeing and revolutionary for me,” Merlin told Q. “It comes down to years and years of being told we can only be one sexuality and one way, and Onyx says you can be whoever you want to be, and they give you the tools to get there.”

On the eve of Atlanta Leather Pride, and as the Onyx Southeast chapter prepares for its 20th anniversary as home base for black gay leather men, Merlin and other Onyx members pose for Q and reflect on their history and mission.

Merlin eventually became a full brother in the national organization, which has represented men across the country since 1995.

“I decided this is going to be the leap I’m going to make, because I want to be in a safe space to learn something about myself that I probably wouldn’t be able to do otherwise,” said Merlin, who preferred to leave out his last name. “I wanted the brotherhood as well. Me being an introvert and kind of a loner, sometimes it can be difficult making those kinds of connections.”

The men said they don’t always feel welcome among white leather men, and at worst are fetishized for their race. Being part of Onyx flips the script for its members.

Optimus said it’s empowering to see people that look like you and have similar life experiences as you doing what they want.

“It draws you in, it takes away that alone feeling,” he said. “Once you realize there’s these people there doing all these things, it gives you permission for your mind and your heart to wander and discover things about yourself and more about what you’re into.”

The men of Onyx Southeast meet at the Eagle on the first Friday of every month. The day after that, a meeting is held to discuss chapter business, then the group goes out for dinner.

There are also monthly teachings on any number of subjects. The group learned about wax play in February, and in March they learned about sensory play and role play.

Merlin said these sessions help “to sharpen our skills.”

But it’s not all bar nights, chapter meetings and skills sessions. Onyx Southeast also does a quarterly community service project. The latest one gathered books for the Books for Africa program. Also, they often partner with Atlanta non-profit organizations.

Onyx’s community service might surprise some people, but Merlin said they’re used to dealing with preconceived notions about the group — specifically, that they’re “sexual deviants.”

“That’s not the case,” he said. “If anything, we’re sex positive in the things that we do. We’re not deviants. We are people who own our sexuality.”

Nor is Onyx a sex club.

“We promote healthy sexuality,” Merlin said. “We promote people being able to do what they want to do in a sexual environment.”

Being one of nine chapters Onyx has across the U.S. comes with benefits, Optimus adds.

“What’s amazing about being a part of such a larger organization is I can pretty much go to any city I want to just visit and get connected to folks that are in my club or close to my club,” said Optimus. “That sense of community and safety and being able to take that anywhere, it’s pretty priceless.”

The Onyx Southeast members are looking forward to celebrating the chapter’s 20th anniversary this July. They’re planning a three-day event that includes a bar night, then an official anniversary celebration, followed by a Sunday brunch.

“Not a lot of organizations are making it to 20 years period,” said Merlin. “We are really excited that we’ve weathered whatever storm that’s come our way to make it to 20 years.”

In celebration of the group’s anniversary, Q contributor James L. Hicks collaborates with Onyx members to create portraits. Keep scrolling to explore black men in black leather and the various expressions of what it means to them.

A version of this feature originally ran in Q magazine. Read the latest issue: