‘Men With Money,’ 50s gays without all that bigot baggage 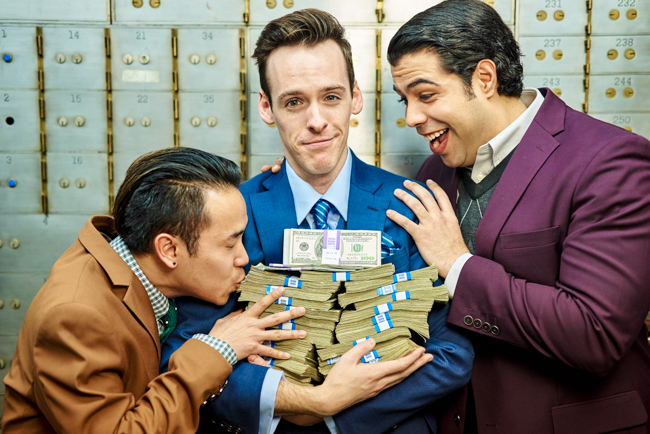 Aurora Theatre opens another big, splashy musical that it’s known for this week, but the Lawrenceville troupe also does something that it's never done — an LGBTQ-themed production. Men With Money makes its world premiere and finds three bachelors looking for love in the Big Apple – and for two of them, husbands.

The musical is the creation of two gay men. Bill Nelson wrote the book and lyrics, and Joseph Trefler handled the music and additional lyrics. It’s their first project working together, and it’s one that’s been in the pipeline for five years now. The two both attended NYU’s Tisch School of the Arts and met when Nelson, an alumnus, came in to work with students. Justin Anderson, who was behind Aurora successes such as “Les Miserables,” “The Bridges of Madison County” and the recent “Newsies,” durects.

Men With Money is set in a fantasy version of the 1950s in which it’s OK to be gay, sans any real political agenda.  Louis (Sean Doherty), Max (Marcello Audino) and Sonny (Kenny Tran) are friends, and at ringleader Louis’ suggestion, they decide to go after rich spouses to solve their money problems.

Louis, however, has a block against love because he’s been hurt in the past. He goes after a rich guy, on paper a perfect fit, but the magic isn’t quite there. Later he meets a hot dog vendor, with whom there is a spark, yet he doesn’t want to take a chance. Over the course of the show, his sentiments slowly change.

Nelson and Trefler looked to classic stage musicals such as Guys and Dolls, How to Succeed in Business Without Really Trying and On the Town as inspirations, as well all the movies from the ‘50s with “protagonists going off into town and doing something,” Nelson says.

“I love the ‘50s aesthetic, the music and costumes, and Joseph feels the same way,” he says. “When I was a kid, I loved movies and shows from the era so much, but I never thought I was represented because I was a gay guy.”

The cast is mostly local with the exception of a few New York performers.

“All are happy to play characters who aren’t sad, or dying or coming out, but are just trying to live their best lives,” Trefler says.

When the pair submitted the show to the National Alliance for Musical Theater, it came to the attention of Ann-Carol Pence, one of the festival’s adjudicators, Aurora’s associate producer, and an unabashed lover of musicals.

She reached out to and invited them to debut the show at her theater.

Nelson and Trefler jumped at it.  They loved the company’s passion for musicals and mission of diversity.

“We really needed racial diversity in the cast to sell the idea of the show,” Nelson says. “Aurora does that already – and they have been wanting to do a gay-themed play for some time now.”

After the Aurora run, the ultimate goal is Broadway. Nelson and Trefler have invited lots of producers to Atlanta’s run in hopes they can book future engagements. As New Yorkers, they are aware that oftentimes new work is staged out of town so it’s off the radar in case it doesn’t go well, but none of that mattered, they say.

“We just wanted to see it in front of people,” Trefler says.

But first things first. As this is a world premiere, the content of the show itself is still in flux.  The two have already rewritten the opening number while in rehearsal, and they are busy re-doing another song. Over the five-year span of the show, Trefler estimates that roughly 14 to 15 songs have come and gone.

Yet that’s part of the process – and what makes it exciting for both of them.

This preview originally ran in Q magazine. Read the latest issue below for even more.