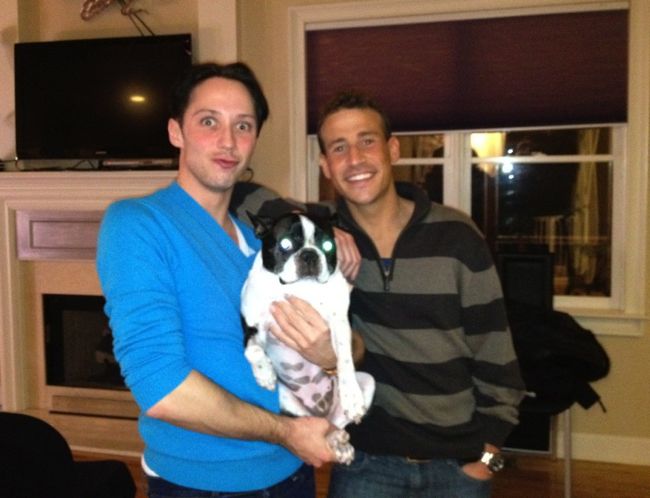 Figure skater and Olympian Johnny Weir made the most of his CNN-sponsored booty call in Atlanta last week, hitting the town with his newly-out boyfriend, meeting the in-laws and dining in Buckhead like any good queen. Weir left Atlanta on Monday morning, lamenting that he’s leaving behind his posh digs at the Mansion on Peachtree. Hopefully, he was put up in a premier balcony room offering a 37” LCD TV with one of those fancy retractable artwork coverings, a deep soaking tub and a frameless marble shower large enough for him and cutie Victor Voronov to clean up after all that, ahem, hitting the town. Those suites list for $315 per room. Weir announced in October that he was engaged to an Atlanta lawyer, who lives with his Russian family in the suburbs. Maybe that’s why Weir was booked at the Mansion. But the flamboyant skater with his own reality show was coy about identifying his flame. Though not very careful, as he’s been swapping cutesy tweets with @vitya_zvesda. Turns out that’s Voronov, an Emory graduate with a law degree from Georgetown Law School. Why so quiet about identifying Voronov? Weir says that his man is 28, newly out and having an “uncomfortable, rocky road” going publicly gay. Sound familiar? Weir bobbed and weaved around public discussion of his sexual orientation until earlier this year when he confirmed he was gay as he pitched his new book. But the long-distance couple – Weir lives in New Jersey; Voronov here in Atlanta – is lifting the veil on their coupledom. Voronov was sitting in the front row of the audience last Wednesday when Weir took part in a CNN Dialogues panel at Grady High School. Fashion wise, Weir went for a serious look, sans “feathers and nipple tassels and all that.” After the panel, the two headed to Greenville, S.C. for a Weir on ice performance, then back to Atlanta so Weir could meet Voronov's parents. Hopefully Weir went for subdued again. Not sure how the future in-laws would take to high heels and tassels. On Saturday, it was date night. Weir hasn’t been shy on Twitter about dating @vitya_zvesda:

Thank you Mansion On Peachtree hotel, the best in Atlanta. I am sad to leave! ATL--->LGA. I love you @vitya_zvesda!! Going out for date night with @vitya_zvesda, Zhenya and Lama. Atlanta is booming tonight! En route to Greenville. @vitya_zvesda literally had to carry me to the car this morning. Tired and cranky. Thank god for Starbucks. En route to LGA. Yuri is choreographing my new gala number to Vaenga as we drive. I have the best team. ATL I'm coming! Yay @vitya_zvesda.

And this one, from Dec. 12, can soften even the most bitter queen:

Landed at JFK from Moscow. Missing Russia so much! But seeing @vitya_zvesda the day after tomorrow is the silver lining.

For his part, Voronov tweeted that date night went well not long after offering a photo of Weir and a cute pup named Togo with this: “My two favorite things.” Photo of Weir (left), Togo and Voronov via @vitya_zvesda