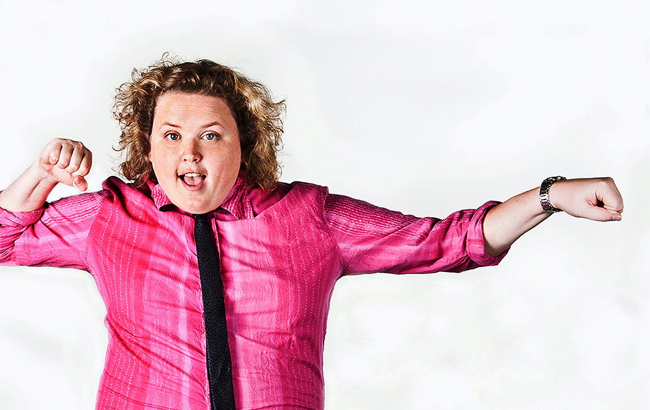 Fortune Feimster sounds like the name of an adventurer or a superhero, and it may very well be. This Southern girl with major national cred sets her sites on Atlanta to broaden her comedy empire.

Feimster has probably already made you laugh (video in character above). The lesbian entertainer has made a name for herself as one of the funniest panelists on “Chelsea Lately.” As she heads to Atlanta’s Laughing Skull for gigs on Friday and Saturday, she talks with us about her roots and her process.

Does your growing up in the South influence your comedy?
Oh yes, I am sure it’s the same way in Georgia as it was for me in North Carolina. I grew up around a lot of characters that were actual people and storytelling was a big part of my growing up and kind of a southern tradition. People at dinner would hold court and tell about their day, and it would always be funny.

It definitely shaped my comedy because I learned it from watching all the crazy people around me. I wanted to be funny and not be so crazy in my life. I attribute my love of humor and in a part my sense of humor to growing that way in the South.

I love the South. My whole family lives in North and South Carolina, and … it is always a lot for fun for me because I get to eat a lot of fried food and drink a lot of sweet tea.

How has your “Chelsea Lately” and “After Lately” experience affected you?
The job itself has been really good for me in that before I got hired on “Chelsea,” I had only been on “Last Comic Standing,” so it was the breakout thing that made people finally know who I was, which has been amazing because, you know, as a performer, you want more than anything for people to see what do.

Being on “Chelsea Lately” has been a huge platform for me and changed my career. It is a fun job because we all really like each other. It is a group of writers who are at a round table, and you are constantly laughing. I mean, we drive each other crazy sometimes too, but for the most part it is as fun as you would think it would be.

Who were comedic role models when you were coming up?
I watched a lot of Carol Burnett reruns with my grandmother so I love that old-school humor. I think Carol Burnett has the biggest influence on me because I do standup and I do sketch comedy, and I feel like that is pretty much what she did on her variety show because she would do the monologue and then sketches.

I kind of modeled myself after her in a way. Then I was also a big “Saturday Night Live” fan and used to record the shows on VHS so I could watch them back and learn all the characters. My family was always really funny, so we would make each other laugh a lot.

How has being gay affected or influenced your career?
Knock on wood. It doesn’t seem to have affected it negatively so far. It has been a positive on “Chelsea Lately” because she has such a huge gay following and it has allowed me to represent the community, hopefully in a positive way.

I do find lately that a lot of the roles I get sent are either for really heavy women or lesbians (laughs). I am starting to see a pattern here guys. It’s not like I expect to get the Jennifer Lawrence roles but people start to see you a certain way after a point. If that is how they are going to see, I am going to be the best version of that there is.

Do you think there is a shared queer comedic sensibility?
I find that shows I do where it is a primarily gay audience are some of my favorite to do. I think that we as a community, specifically the younger generation, have a nice sense of humor and get the joke and don’t take themselves too seriously.

I find that there are people who take things a little too seriously, and it may be because they come from a time where being gay wasn’t as accepted as it is now. Not that we’ve accomplished everything we need to accomplish. I do think the LGBT community in general likes to have a good time and we know life is too short and sometimes you can do is laugh at the world. And I like that feeling, where everyone decides to go for the ride with me.

When did you know you were funny and could make people laugh?
Everybody always assumes I was the class clown or life of the party, which I was in certain ways, but I was also really shy so I had two sides to me. When I was comfortable around a group of people, like in a class, I make jokes and be silly. I would always stake out my environment to see if it was a safe place to be funny.

We love your Darlene Witherspoon character (video above). Is she based on anyone?
Well, I have always loved the restaurant Hooters, it is a very classy joint. I grew up with two older brothers so I have been going to Hooters since I was 10 and it was always a sort of an big family outing. I was filming a bit for a sketch show and I needed to be a judge for children’s pageant.

I had this Hooter’s outfit from Halloween, we filmed in an alley real close just to see what would happen. My friend started filming it, and I made up everything right on the spot and I remember when we finished filming thinking that it was going to be something cool. I don’t always have that feeling when I do character work so I knew this was something special. There people on the internet now who think that Darlene is a real Hooter’s waitress and are all “Oh my God, that poor woman.”

Any advice for up-and-coming gay comics?
My advice to them would be the same as any up and coming comedian, actor or any performer and that is to work hard. I feel like a lot of people I meet in LA move out here and they think if they do a couple shows then someone is going to discover them and all of the sudden they are going to be on television and that is how it works. And that is not how it works. Not many people know this, but I have been in Los Angeles for twelve years and only been on television for the last three and a half years. It takes a really long time for anything to happen. … I stepped it up and started doing five shows a week and every minute of my life became dedicated to this goal. It takes a tremendous work ethic, and it doesn’t matter if you are gay or straight if you are not willing to put the work in.

If race or gender or age were not an issue, what role would you want to play?
To be able to play Effie in “Dreamgirls” would be amazing. To be able to sing the notes (laughs) ooh child. I would be, “Y’all just need to sit here and listen to me sing about my problems!”

If 13 year old you could see you now, what would she say?
She would be super impressed that I didn’t grow up to be a crazy weirdo, because I was pretty weird and awkward at the age of 13. I would definitely high-five myself and be like “Yes!” I would be so happy I wasn’t living at home anymore and I would be impressed I am able to afford my own video games.

What question are you always asked in interviews, and which one do you wish they’d ask?
Everyone always wants to know what it is like to work with Chelsea. I wish people ask more about my workout tips (laughs) and how I stay so slim and trim during the holidays. Not enough people want to know about that.