A conservative Georgia lawmaker calls him a pansy. A Republican leader is chased out of the Gold Dome. Yep, Bryan Long and his progressive watchdog group Better Georgia are making waves. Long, a former journalist and marketing expert, left that work behind to found Better Georgia in November 2011. An affiliate of progressive advocacy organization ProgressNow, Better Georgia made a big splash last fall by exposing the efforts of former state Senate Majority Leader Chip Rogers in hosting a lecture for GOP lawmakers that claimed President Obama and the United Nations were using "mind control" practices to force the acceptance of a land use agenda. Days later, Rogers resigned and landed a plum job at Georgia Public Broadcasting. Better Georgia has dogged him ever since. But the progressive group isn't always political. Better Georgia polled nearly 1,300 likely voters across Georgia in January on a wide range of topics from education to gun violence. They also asked about gay marriage, finding that 61 percent of respondents supported legalizing civil unions or marriage for gay couples. Some 34 percent opposed it. 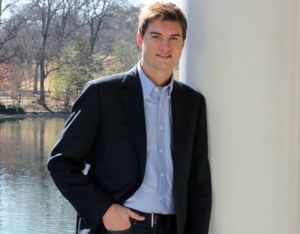 We caught up with Long (photo) to talk about Better Georgia, its work and how being the gay founder of a progressive group has gone over in a state as politically red as Georgia. After all, he's making waves in a place that cherishes anti-gay bigots like Rinda Wilson, Tanya Ditty, Judy Manning and Sue Ella Deadwyler. What prompted you to turn from your career in journalism, and most recently communications, and launch Better Georgia in November 2011? I spent a few years looking for ways to be more politically active, thinking that might mean being a more active small donor or possibly consulting with candidates. I’m not sure exactly what I was looking for but it certainly wasn’t starting a non-profit. In the summer of 2011 a few friends presented the idea of launching a ProgressNow affiliate in Georgia. It felt like a once-in-a-lifetime opportunity so I made the leap. Why a new political watchdog group? Aren't there existing groups that tackle this? Or is Better Georgia carving out its own niche? Georgia has many successful non-profits that serve as watchdogs for a variety of issues. But these groups also lobby the General Assembly. When you’re asking the Republican-controlled legislature to make changes within bills, you must shake their hands, smile and ask for favors. We’re the only group that doesn’t politely ask lawmakers to make any of their bills better. We’re simply asking voters to pay more attention. Because of this, we’re able to show the flaws of elected officials in a way no other group can.

The group is non-partisan. But Georgia is a Republican-led state. So is Better Georgia being tagged as a progressive group? Or worse -- at least at the Gold Dome -- as liberal? How has the group been received by the public? Being non-partisan simply means we don’t coordinate our activities with either political party. We advocate for values, not political parties. We proudly claim the label progressive. The governor has called us liberal and we don’t mind. Some of our conservative opponents have called us communist, which is laughable. Right now the political debate in Georgia is between the right and the far right. Better Georgia is here to change the political debate so we can change the state. Progressives love that. The current government establishment and its conservative base hasn’t really enjoyed the attention. There's you and other staffers? Are there others? How is the organization funded? We’re a three-person operation and growing. Don Weigel serves as our Political Director. Seth Clark filmed Rogers’ Agenda 21 meeting and is just one of many amazing volunteers. We survive nearly 100 percent on donations from people who like our work. We have more than 1,800 donors. The average online donation is just $40. We’re lucky that we have a growing number of donors who write even bigger checks.

You're gay and Don is not. How does that inform your work and the organization? Has it been a hindrance or asset? Equality is one of the top issues for progressives in Georgia and nationally. Being gay has been a non-issue for our donors. I can’t say that it has helped or hurt fundraising. I’m gay and that’s simply a fact. Last April, however, Rep. Earl Ehrhart called me a “pansy” and the Marietta Daily-Journal printed it on the front page. That name-calling led to news articles on a handful of national progressive blogs. I’m not concerned about my sexuality in a political sense. Georgia voters are pretty smart and most support fairness and equality. How has the reality of the last 15 months of operating Better Georgia meshed with the goals and plans you had as you launched it? We’re off to an incredibly quick start. In the first four months, one of our videos reached 1.2 million views. Within a year, we had our second 1-million-plus video. We helped take down Chip Rogers from his position as Senate Majority Leader and are holding Gov. Nathan Deal accountable for appointing Chip to Georgia Public Broadcasting. Better Georgia played a very public role in pursuing Chip Rogers, documenting his foibles and contributing to his leaving the state Senate. Now you're pursuing his Golden Parachute landing at GPB. How did you get involved in that? Other success stories since the group's launch? Chip Rogers was in our focus from the day we opened our doors. We knew that his brand of Tin Foil Hat conservatism did not represent most voters in the state. Despite that, he had a powerful leadership position. When we saw that he used his official government letterhead to invite lawmakers to the Gold Dome for a meeting to discuss President Obama’s “mind-control techniques” we thought it might be interesting and newsworthy. We were right about that. When Gov. Deal created a job for him at GPB, we immediately knew that we could tie Chip Rogers to the governor and turn the golden parachute into a political anchor.

Why should LGBT Georgians be interested in Better Georgia? How could it benefit them? Our goal is to turn Georgia into a two-party state instead of a Tea Party state. Less than 20 percent of Georgia voters consider themselves to be conservative, but the General Assembly is two-thirds conservative and led by the Tin Foil Hat caucus. Anyone who is interested in firing up the full power of Georgia’s progressive voters will be interested in Better Georgia. Tell us about the recent statewide survey Better Georgia conducted. What prompted the question about gay marriage? What did the results show? What's your reaction to the numbers? We survey voters statewide at least once each quarter. We test a wide variety of issues in each poll. After the 2012 presidential campaign, the New York Times’ Nate Silver ranked our polling group as the most accurate in Georgia. I’ve been pleasantly surprised to see that 61 percent of Georgia voters support legalized marriage or civil unions for gay couples. Only 34 percent oppose any expansion of gay rights. I hope that progressives in Georgia begin to feel that we’re in the majority here at home. We have to stop believing the opposition’s lie that Georgia is overwhelmingly conservative. It’s not. Anything else you'd like to add? Since I started Better Georgia, I’ve heard too many people talk about Georgia’s changing demographics and how great it will be when demographics change enough for the political winds to shift. It’s important to remind people that demographics have been shifting to our advantage for a decade and we continue to lose elections and ballot measures. Demographics are not magic. To make a change in Georgia, we need to demand that our elected officials represent our views and work harder to win at the ballot box.