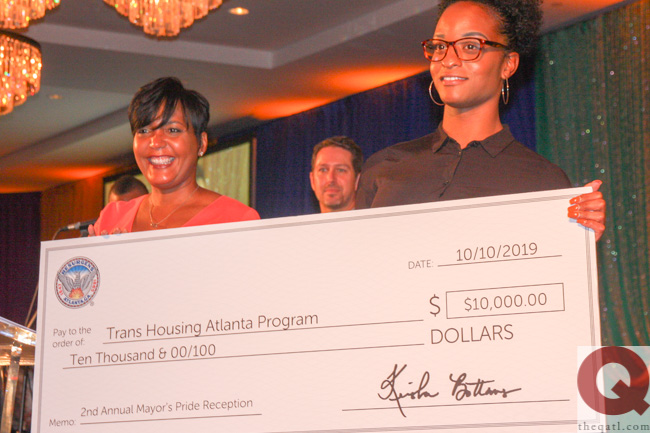 The Fulton Board of Health took another step in fighting the county’s HIV epidemic by hiring its first transgender coordinator, who will also oversee career development workshops and work with local trans organizations.

Justine Ingram (photo right), who started in the position in May 2018, said her primary focus is HIV prevention among trans people in Fulton.

Ingram held a free career development workshop for transgender Fulton residents at the Board of Health in January. She said it’s another tool to help fight HIV.

“We know that our socioeconomic status can affect someone and make them more susceptible to becoming HIV-positive,” she said.

The transgender coordinator position was funded by a grant from the Centers for Disease Control & Prevention, according to David Holland, chief clinical officer for the Fulton Board of Health.

“In a very short period of time, Justine has done a tremendous amount of work and provided much-needed engagement with the trans community, something we had not previously been successful in,” he said. “Creating this position is some of the best money we have spent in our efforts to end HIV in Fulton County.”

Ingram also works with local trans organizations to help them build the capacity to provide better services to trans people in Fulton. She's working on creating trans sensitivity workshops next.

“We want to work with organizations and businesses and corporations to make sure they’re making their workplace more affirming for transgender people,” she said.

Ingram was a case manager for Trans Housing Atlanta in 2017 and 2018 and now sits on the group’s board of directors. She accepted a $10,000 check on behalf of the group from Atlanta Mayor Keisha Lance Bottoms (photo left) at an Atlanta Pride reception in October.

Fulton is one of four counties in metro Atlanta targeted as part of a federal plan to end HIV by 2030. Forty-eight counties in 19 states – plus seven states overall – are part of the plan. In 2016, Fulton became one of the first county health departments in the South to launch a PrEP clinic.

Alex Wan – a longtime non-profit leader and the first gay man elected to the Atlanta City Council – now leads the board that...
Read more
News

This story was originally published by the Georgia Recorder. A group of Democratic lawmakers staged a sit-in at the state Capitol after Democratic Rep. Park...
Read more