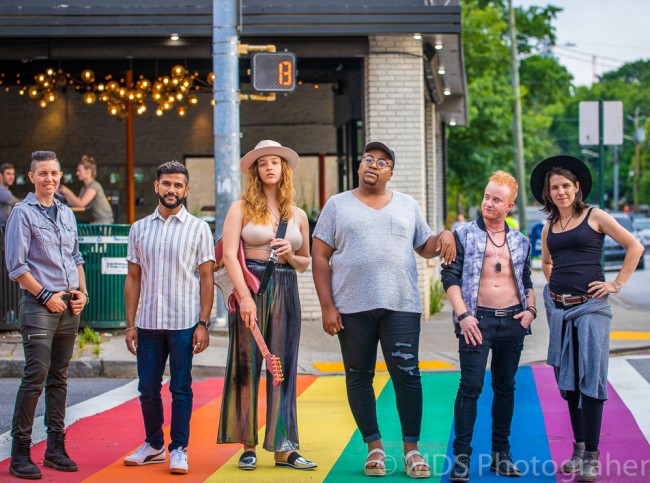 It started during World Pride celebrations in June. Photographer Marina Delaine-Siegel gathered a diverse bunch of local LGBTQ people for portraits in some iconic Atlanta backdrops.

“Somewhere over the rainbow was not way up high but right here in Midtown Atlanta,” Delaine-Siegel says. “[We] joined together some of Georgia’s own musical artists, Netflix Queer Eye heroes, awesome entrepreneurs and healthcare professionals, to continue the education, awareness and love that historically was displayed during the Stonewall March 50 years ago.”

Dubbed her “fabulous eight,” the photographer expanded on the group portraits for Q’s Pride issue to highlight some of the individual members from the original shoots.

“They are proud to be a part of the amazing city of Atlanta, not only known for our great music but as a large hub for the LGBTQ+ community,” she says. “Their hope is that, as Atlanta’s main celebration and festivities for Pride kick off, they encourage a celebration with the world and everywhere to promote equality and love.”

Keep flipping pages to meet this year’s Faces of Pride.

Musician, artist and proud member of the LGBTQ+ community here in Atlanta. Canadian-born and Atlanta-claimed, Shag holds many titles in her musical journey, constantly evolving and creating: Singer-songwriter, multi-instrumentalist, and producer.

She has played Atlanta Pride twice and loves spreading awareness for humankind through her art and love for music.

This proud gay, black, Southern young man from West Georgia was recently featured on the Season 2 premiere of Netflix’s Queer Eye. That’s where the world got a little insight on the power of love between his mother Tammye and her gay child.

Since the show, Myles has been continuously working on giving queer Christians a platform of education and acceptance.

By sharing his personal journey as a transgender man in the South, Skyler is an LGBTQ advocate for those in Georgia. But as another of Netflix’s Queer Eye heroes, he has used the platform to lead the cause for equality for transgender people nationally.

As this issue of Q went to press, Jay’s landmark case against the University System of Georgia — which includes 28 public colleges and universities including UGA, Georgia Tech and Georgia State — resulted in USG ending its ban on trans healthcare benefits for its employees. Read his Q interview.

In her third term as the youngest member of the Georgia House of Representatives, Cannon is excited to represent Midtown, Downtown and Southwest Atlanta. At the 2016 Democratic National Convention in Philadelphia, she said, “We need to trust black women!” and will continue to stand up for LGBTQ and minority visibility in the South.

Park is openly queer and a founding member of the Equality Caucus. She serves as secretary for the Women’s Caucus and serves on the Executive Committee of the Georgia Legislative Black Caucus. She’s on the Insurance and Small Business Development House Committees, City of Atlanta Delegation, Fulton County Delegation and the bipartisan Future Caucus.

Arrie Bozeman and Barb Carbon are the queer duo that front the Atlanta-based indie rock band the Ain't Sisters.

These powerfully raw dynamos deliver a fresh sound that is dynamic, intelligent and fun with zero regards for your boundaries and boxes.

Blazing a path for authenticity and self-expression, the Ain’t Sisters are unapologetically themselves and encourage others to follow suit by way of their brutally honest lyrics, and more directly via their involvement in music education and LGBTQ advocacy.

Mo aids humankind as a healthcare professional in metro Atlanta.

He is a Burmese Indian who loves spreading awareness and education while utilizing his professional medical skills as a nurse to help others.

This pastor and intuitive life coach prides himself on creating space for LGBTQ folks to thrive through rediscovering their infinite connection to love. He is also the co-creator of Queerly Beloved Apparel Co., a line representing and giving voice to queer people of faith.

This feature originally appeared in Q Magazine. Read the full issue online below: