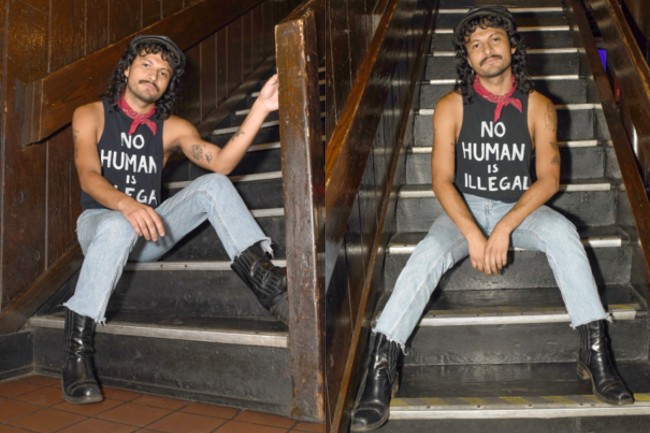 Kenneth Figueroa is a man on a mission. He has come a long way from the “huge anti-social goth kid” growing up in Acworth, Ga to becoming queer Atlanta's own DJ Esme.

Figueroa began his music career in Atlanta’s punk and goth scenes before making the switch to the DJ booth, where Esme was born. Among his other associations and accomplishments, Figueroa is a hairstylist at Melrose & McQueen in Old Fourth Ward and co-founded the wildly popular Latinx party La Choloteca in 2016, which Q profiled last year.

This time, Figueroa sat down with Q to more about himself. Keep scrolling as we talk music, family, and empowering queer people of color in Atlanta.

What was it like growing up in New York and Georgia?

My family was very much a pack, so when one of us moved, we all did. Upon moving to Georgia, it was a different kind of displacement.

In New York, there was so much diversity, specifically in White Plains where there was a large Peruvian population. We were basically alone in Georgia, so my family stuck through it together. My cousins and siblings all grew up together largely being the only friends that we had. The traditions of our family were loud, but always contained in the walls of our suburban homes.

What inspired you to make the switch from punk and goth bands to DJing?

I noticed a lack of representation. While I played in punk bands, I never felt like I could authentically be myself, whether that be my queer or Latinx identity. When I started my career as a hairstylist, music was put on a backburner. Then came Choloteca, where I was just an organizer in the beginning, but with the encouragement of my peers, I began DJing.

I understand that many places in Atlanta don't approach me to play their events or parties because of the style of music I curate, but that is my whole agenda. I'm here to show a piece of the huge part of Atlanta that exists but goes overlooked.

It's never my intention to play it safe and make people comfortable. It makes me so happy to see that other parties like Morph, WERC and Deep South are just as dedicated to showing up unapologetically and serving it so well.

Who are your biggest musical influences?

I grew up listening to a lot of alternative ‘80s/goth music because of my tio [uncle]. Coupled with the fact that I lived in small-town Georgia, it was no surprise that I was a huge anti-social goth kid [laughing]. I listened to a lot of sad folk music as a teen in a way to cope with life I suppose.

In the mix of it all there was always salsa and cumbia music playing in the background, whether it was my mother cleaning the house or a relative's birthday party, which were fucking wild back in the day.

Currently, I'm very inspired by the neoperreo movement, because it aligns with many of Choloteca's values as well as my need to throw my ass in a circle. Led by queers and womxn, it's a cultural shift that says we're allowed to be here and elevate each other in opposition to the patriarchal and classist tenets that were often displayed by reggaeton's leading performers.

How did your recent set in Puerto Rico come about, and what was that experience like?

My friend Jhoni Jackson has been living there for a few years by way of Atlanta. She set me up playing a gig at El Local de Santurce where drag kings dressed as drag queens in resistance to the binary. Hurricane Maria's shadow still lingers over many parts of PR, so to see a queer community thriving despite that was beautiful.

I was also surprised to find out it was Pride while I was there, so I truly lived the queer experience in San Juan. It's not common in Latin American countries to be able to live your true life publicly, so to see how San Juan's queer community is resisting and thriving was a true inspiration to only work harder in Atlanta.

I've never been very good at management of myself or my life [laughing]. While I have thoughts and goals for what my future holds, I don't try to linger on them so much because the present is more important.

Josephine — my cousin and partner in Choloteca [aka DJ La Superior – ed]— and I are always trying to hold ourselves accountable for the intentionality of what we do. While we've brought a different light to nightlife in Atlanta, we're also trying to shift that culture because it can be very toxic and abusive.

While dancing is a very healing process for us, we understand that we cannot stop there. We are committing to truly giving back, investing in and empowering our community in Atlanta because popularity and social clout don't mean a damn if there's not a mission behind it all.