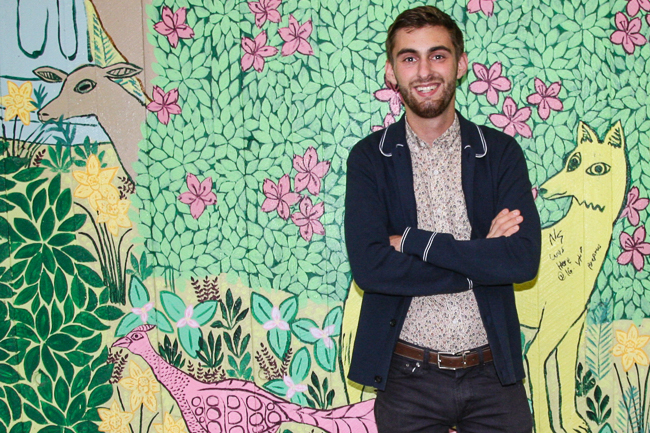 Charlie Paine was really young to get so involved in saving old spaces. He made headlines as a 16-year-old Woodward Academy student when he helped lead the effort to save Briarcliff Mansion, the century-old building on Emory University’s campus that gave Briarcliff Road its name.

Paine kept at it, majoring in architectural history and historic preservation at the College of Charleston. While there, he commuted back to Atlanta weekly to volunteer for Cathy Woolard’s 2017 Atlanta mayoral campaign and to organize an LGBTQ youth mayoral forum.

Paine, now 23 and an interior designer, is the LGBTQ History Committee chair for Historic Atlanta, a volunteer-run group dedicated to preserving landmarks.

He chatted with Q about coming into his own as a gay man and the future of Atlanta’s LGBTQ spaces.

What was life like for you growing up in Atlanta? What kind of kid were you?

My mother Jennifer was a single mom of two living in a small duplex across from Morningside Elementary School after my father left at a young age. She eventually met her second husband when I was in first grade.

I was extremely awkward in elementary and middle school and was always hyper focused on whatever personal fad that year had to offer, whether it was Titanic, crystals or sharks. I really became myself in my latter years at Inman Middle School and then Woodward and became more social and open with my sexuality as the years progressed. It is easy to be yourself when you grow up here. I didn’t realize how good I had it until I left for Charleston.

What was it like volunteering for Cathy Woolard’s 2017 mayoral campaign?

Many of the weekends I drove back from Charleston were to host a Cathy Woolard meet-and-greet, attend a general campaign event, march in the Atlanta Pride parade with her, or wave a giant “Cher our love for Cathy Woolard” poster on Freedom Parkway for 15 hours on Election Day.

Although she didn’t get elected, I think we are still moving in a positive direction as a city thanks to many of the passionate residents of Atlanta that I met during that time supporting all candidates. It is that passion that has inspired me to make a difference though the creation of Historic Atlanta to help better preserve the unique stories of Atlanta.

What was Mary Norwood’s reaction to you dressing up as her for Halloween?

When Mary and “Hairy Mary” made first contact at Blake’s in Halloween of 2017, we had the best time! We gossiped about where each of us got our outfits. I remember she bought hers at Macy’s and I ordered mine on Amazon while at school in Charleston after searching hours online for an exact match to one she herself already owned. I still have the dress, the wig and the nametag. Who knows… maybe it will all come out of the closet again someday!

Why are you passionate about historic preservation?

My original interest in preservation began with the Briarcliff Mansion, a Coca-Cola family home. It was a marvel of architecture that also was a monument to a man that created the Atlanta airport and set the stage for Atlanta’s modern prominence as a transportation hub.

That was part of an early understanding that the preservation of spaces is the preservation of memory. When we move to preserve the tangible histories of the people who came before us, we remember them. That remembrance ensures we do not forget our place in the world and history.

When we remember the accomplishments of the Atlanta Student Movement, the Gay Liberation Front and the Save the Fox Campaign, we take those memories and realize that anything is possible when we work together. Atlanta has a unique story to tell, and it’s time we fully embrace it.

What worries you about the legacy of Atlanta’s LGBTQ spaces?

The lack of LGBTQ ownership of the land those spaces sit on and the rising value of property regardless of ownership. The home where Michael Hardwick was illegally arrested in his own room is now a private residence. Ansley Mall, owned by Siegel development, was the site of a police raid of an Andy Warhol film where several members of the LGBTQ community were arrested in the ‘60s.

Other locations such as Bulldogs, Blake’s, the Atlanta Eagle and others are in areas where investment is pouring in without regard to these places’ value to the LGBTQ community. This is dangerous to our community, especially when these places live off of each other. It’s a domino effect. When one falls, it changes the everyday movements of our community and can adversely affect other LGBTQ spaces.

What’s the latest on Historic Atlanta?

We are working with the city and various other organizations to preserve the legacy of the civil rights movement though grant writing and other activities.

Historic Atlanta recently launched its Special Committee on LGBTQ History aimed at remembering the Fight for Equality, the AIDS crisis and preserving the LGBTQ spaces that make Atlanta the “Gay Capital of the South.” One of the first actions the committee will likely push for is working with the city and fundraising to commission an LGBTQ Historic Resource Survey & Context Statement to guide the City of Atlanta in its efforts to best preserve LGBTQ Atlanta.

If you could have dinner with any three people, living or dead, who would it be?

Dionne Warwick, Marsha P. Johnson, and my paternal grandmother Joyce Paine. Dionne Warwick is my favorite artist, and she has such an interesting story as a black vocalist that attributes her successful career change to Atlanta’s Royal Peacock on Auburn Ave. I wish that I had dinner and became friends with Marsha P. Johnson so we could have thrown our heels together at the cops that night. Lastly, I would choose my grandmother Joyce since she taught my mother how to cook all of my favorite family recipes. I don’t remember Joyce cooking a meal, and I really wish I knew if my mom’s cooking was still up to par.