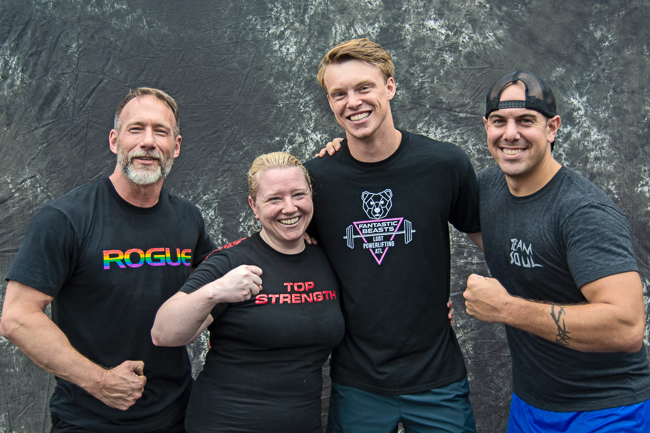 When David Holland and Reed Gilbert started powerlifting together in spring 2017, they realized there was a void in LGBTQ Atlanta. Even with all the gym bunnies and muscle daddies in town, there was no known club for queer lifters.

“We realized that there was gay kickball and gay swimming and gay volleyball, but there was no gay powerlifting club, and we realized that we could start such a thing,” Holland (top photo, far left) told Q. “There are a lot of people that want to learn how to do strength training but don’t know where to start, can’t necessarily afford a trainer, maybe feel a little uncomfortable or overwhelmed by the gym, and this is especially true for trans athletes a lot of times.”

So the Fantastic Beasts Atlanta LGBTQ Powerlifting Club was born. They started meeting twice a month at Crossfit Downtown Atlanta in Reynoldstown. Q magazine met them there recently to learn more about the club and have members sit for some amazing portraits by regular contributing photographer James L. Hicks. Keep scrolling after the article for more photos, including outtakes not seen in print.

“I was at a point where I was looking for community and when I got there, everyone who I met was friendly and inviting and it was a good environment to learn,” Thomas told Q. “Even though I’ve been powerlifting for four years now, there’s still something to learn.”

“I was also missing and looking for a group environment, but I’m not like a jazzercise or Zumba person, right? Not that there’s anything wrong with being into Zumba, it’s just not my thing,” she added.

Thomas, who identifies as bisexual, said the club is important because a lot of LGBTQ people don’t feel comfortable going to the gym, much less picking up a barbell and working out with heavy weights.

“That is so stereotypically such a meathead thing to do and at most of the commercial gyms, that’s who’s dominating those spaces,” she said. “At Fantastic Beasts, we’re all there to support each other, and it’s beginner friendly and explicitly for queer people. It’s important because you feel safe and you can be yourself.”

“Just to get away every few weeks to be with your people is important to me and refreshing,” she added.

Non-Profit for the People

Each Fantastic Beasts session starts with a group warmup, then one of the three basic powerlifts: squat, bench or deadlift.

“If people are new, there’s some side instruction to the new people so they can get started. We assume that new people have never touched a barbell before,” Holland said. “We do that lift, and then after that, there’s some accessory work and the whole session is about an hour-and-a-half long. People can scale to whatever strength level they are comfortable with.”

The club hit a milestone in May by registering as a non-profit, which expands the options for Beasts members.

“Ultimately, it’s going to help us support athletes doing competitions, which sometimes, there can be financial disincentives for that,” Holland said. “It will help us to be able to support athletes training with us who can’t afford to pay the fees and so forth. We’ve just kind of been covering that on a case-by-case basis, but we can actually do this in a more formal way.”

Lifting sessions are $15 dollars, but the club offers a sliding scale for students or others who can’t afford it.

There are about 15 to 20 people who regularly attend Fantastic Beasts, according to Holland.

“I would say we have a good mix [of ages and genders], but what we really have that is remarkable is a large number of trans athletes,” he said.

They include transgender man Ryan Byrd, who heard about the club through his ex-girlfriend.

“She told me about it, because she knew I was into powerlifting and was looking to grow my queer community,” Byrd told Q. “She thought it would be a nice intersection for me.”

“Also I liked that while everyone in the group pushed themselves, it’s not competitive against each other,” he said. “It’s a super supportive group. The more seasoned lifters will give pointers to the more novice lifters. We go to the competitions and cheer each other on. It doesn’t have that kind of machismo that you get in the other gyms.”

That environment is a welcome alternative, Byrd said.

“When you’re in the gym, it’s a very bro environment,” he said. “Nobody knew that I was trans, and I wasn’t comfortable with it because it was a macho feeling environment. [Fantastic Beasts] was the only time I felt I could be fully authentic and bring in the queer side with me.”

“It’s not often that you see guys do a snap and a ‘yaaas’ after a big weightlift,” he added.