Meet the Atlanta Rainbow Trout teams in the pool 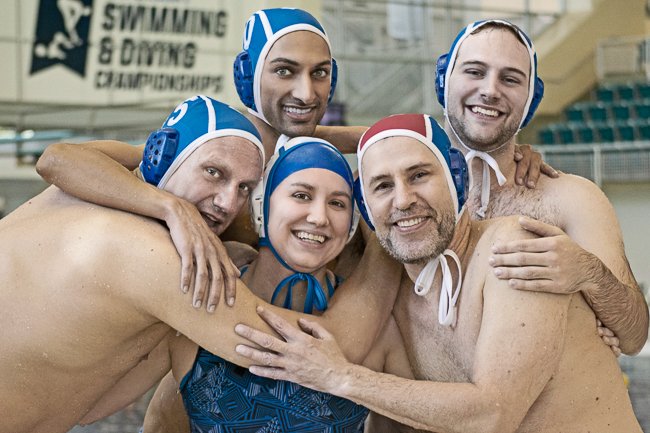 The birth of the Atlanta Rainbow Trout teams came with immediate accolades. Nine members of the local LGBTQ swim club went to the International Gay & Lesbian Aquatics Championship in Montreal in 1995 and returned with the trophy in the small team category.

Flash forward 24 years. The club has expanded to include water polo and triathlon teams in a roster bursting with over 100 active members.

Q sat down with the directors of both the water polo and swim squads to talk about the opportunities the club provides for all LGBTQ and allied athletes of every skill level, and photographer James L. Hicks met some of the members at practice.

The stunning portraits appear on the cover and inside pages of Q magazine, and in the gallery below, including outtakes not seen in print.

“I had just moved back to Atlanta and had a couple friends on the water polo team, and it seemed like a good option to meet people that enjoy playing in the water,” he told Q. “It was an opportunity to grow and meet more people.”

He later switched to the swim team, becoming director of that squad in 2018. In 2019, he became president of the entire club.

Jon Valentine is director of the water polo team. He was also looking for social opportunities “beyond just the bar scene” when he joined the club in 2001. He ran into the water polo team’s founder, Sean Fitzgerald, who convinced him to come by the team’s practice the next day.

“I had a moderately strong swimming background,” Valentine said. “I’d swum summer league at a neighborhood pool growing up, but once I started playing, I came to appreciate and enjoy the physical demands and competitive nature of the sport as well as the strong social nature of the team.”

Evolution of the Trout

“When we began [in 1998], we were primarily a team of former swimmers with no water polo background who started learning the game on our first day of Trout water polo practice,” he said.

The team lost every game during the first few years of tournaments.

“However, we hung in there,” he said. “Fast forward to an international IGLA tournament in Sweden in 2015 where we took home the gold medal.”

The team now welcomes players of all levels — novice, intermediate and advanced.

“The competitive level of the team ebbs and flows over the years, but we always strive to take a competitive team to every tournament,” Valentine said. “That being said, there’s always room for swimmers on our team who are brand new to water polo and would like to learn the sport.”

Water polo is also becoming more common at the high school and college levels in Georgia, which is leading to an influx for Rainbow Trout players post-graduation, according to Valentine.

“Also, since our team is known nationally as one that tries to find balance between competitive play and social interaction, we tend to welcome a lot of players from elsewhere who move to Atlanta for career opportunities,” he said. “Over the years, we've become a better team with a more diverse group of players from many different backgrounds.”

That diversity is reflected in members’ age, race, gender and LGBTQ-and-allied identification.

“All of this has made us a stronger, more competitive, and more socially engaging team,” Valentine said.

Lastinger agreed that Rainbow Trout has broadened its reach in recent years.

“With the more visibility as a team we’ve gotten over the last two or three years, it’s become adaptive to women who are straight, but they enjoy swimming with a bunch of gay guys, or college kids at Georgia Tech who love the fun events we do,” he said. “We’ve become more inclusive of friends and allies.”

He echoed Valentine’s point about the club welcoming members of all skill levels.

“For the water polo team, as long as you know how to float, they can teach you how to play water polo. Same for swim,” Lastinger said. “Each of our coaches for our swim team have four levels of ability that they teach. We definitely make sure to cater to different levels of experience when it comes to being in the water.”

Atlanta Rainbow Trout isn’t short on big competitions or dry-land events. The club just hosted one of its two biannual swim meets in May, and the other one is in December. The water polo team hosts its annual tournament in December as well.

The club heads to New York City in June (just in time for World Pride and its Stonewall 50 celebrations) to compete in this year’s International Gay & Lesbian Aquatics tournament.

Back home in the ATL, the Trout have upcoming fundraiser beer busts, there’s a whitewater rafting trip in August, and they’ll continue their tradition of pizza and beer after practices on Fridays. The Trout-curious can check out the club’s practices which take place throughout the year at the Georgia Tech Aquatic Center. Right now, swimmers practice Tuesdays, Wednesdays, Thursdays and Sundays. Water polo on Tuesday and Sunday.

You can also spot the club members on their outing to the annual Atlanta Braves Pride Night game on June 14 at SunTrust Park, as well as other group outings as they come up.

“My favorite thing about being on the team is that it fulfills so many of my personal goals and provides an exciting means for me to continue growing as a person and competing internationally in an exciting sport,” he said.

“It’s a huge part of these people’s lives,” Lastinger added.

Find Atlanta Rainbow Trout on Facebook and at atlantarainbowtrout.com.

Pick up a new edition each week at LGBTQ and queer-friendly venues around town.