Meet an acappella sextet with a gay Atlanta twist 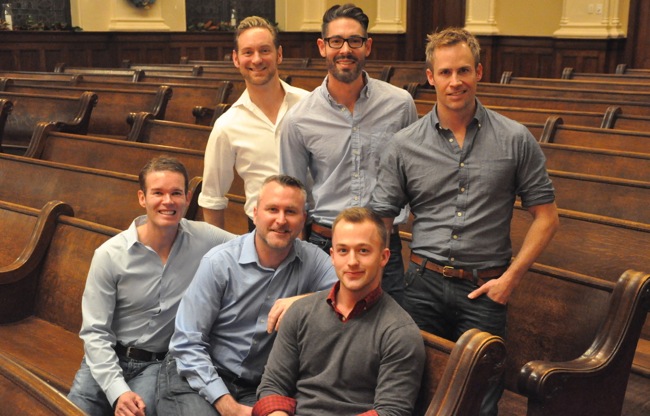 Think One Direction, but with more chest hair. It's Hair of the Dog, a group of six gay Atlanta friends joined together in a cappella and making their public coming out on Sunday during a big gay holiday benefit concert.

We caught up with Hair of the Dog, and member Andrew Moon, to shed some light on how the group came about, their performance style and what to expect on Sunday. Their performance is part of a larger benefit concert for AID Atlanta that features scores of performers. Get ready for some holiday fare.

Hair of the Dog? Please explain how that name came into being.

Our Music Director, Nathan, came up with it during a rough morning rehearsal from one too many drinks the night before. It’s stuck ever since.

Who's in this group? It's like One Direction, but even gayer?

Sunday's event marks the public coming out of Hair of the Dog. How did that come about?

I see what you did there. Sunday at 3 p.m. will be our first performance as a group. We really didn’t intend for the group to be all gay, just sort of happened that way. Nathan, our music director, connected us to the event with AID Atlanta and we couldn’t be more thrilled.

A cappella? Clearly, that's different from the lip synching drag queens and auto tuned pop singers we're used to. So please help us understand what this a cappella thing is all about.

A cappella is totally hot right now (as if it ever wasn’t)! Most of our members have been doing a cappella for years, but with the “Sing Off” reprise, “Pitch Perfect” and “Glee,” it’s just brought the genre to another level in the public’s eye. I think what grabs people’s attention is the level of difficulty. Without instrumentation to lean on, the singers are responsible for maintaining pitch and tempo, and it’s harder than you might think.

What sort of music can we expect from Hair of the Dog? Since it's an all-gay ensemble, maybe some Britney, Madonna and Lady Gaga? Or is the group's approach more traditional?

For the upcoming concert, we’ll be sticking to a mix of secular and sacred holiday songs. As we progress into the spring, we’ll certainly be sampling some pop favorites, as well as other genres (think country, gospel and blue). Not sure what songs we’ll work towards specifically, but we’re definitely open to folk’s suggestions.

Twerking is a thing. Do you guys twerk?

Actually some of us do twerk (or try, at least). We’ll definitely let the twerking happen organically if the performance calls for it.

Hair of the Dog performs during Go Light Your World!, a concert to benefit AID Atlanta on Dec. 15 at Saint Mark United Methodist Church.