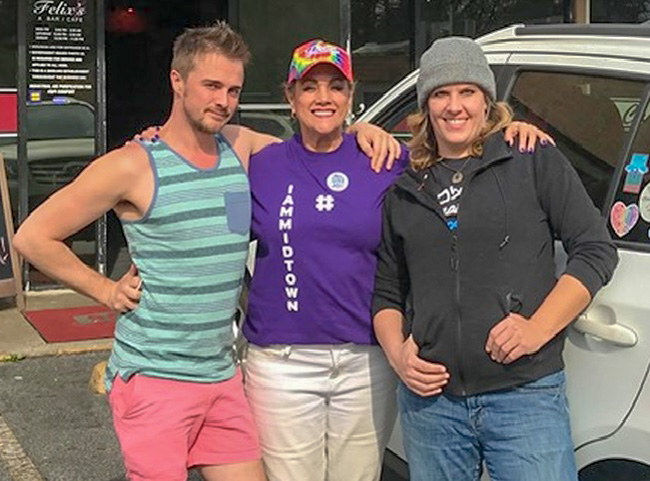 A gay bartender, a lesbian food truck owner and a straight non-profit leader teamed up to provide free meals to service industry employees who lost work due to the coronavirus pandemic.

Meals in Heels makes its debut Friday from 4 p.m. – 7 p.m. in the parking lot of Ansley Square. The idea sprang up as the pandemic became more serious and restaurants and bars began shutting down, according to Felix’s bartender Christopher Wallace (photo left).

“Every Wednesday I cook [free meals] at Felix’s and it’s called Bottom-Friendly Foods,” he told Project Q Atlanta. “So last Wednesday, instead of calling it that I changed the title to Meals in Heels.”

Wallace collaborated with Low-Co Motion food truck Owner Kerry Meier (photo right) and I Am Midtown Co-Founder Lydia Gerzel (photo center) to expand the free meal initiative. Meals in Heels will now donate food to service industry workers every Friday at Felix’s and every Tuesday at different locations in the city.

The program was initially called Meals on Heels, but they were told the name was too similar to the non-profit Meals on Wheels so they changed it, according to Wallace.

“They donated a boatload of food and to-go containers and utensils,” Wallace said.

The meals are cooked in Meier’s industrial kitchen then taken to that day’s Meals in Heels location. Service industry workers just have to show up at the events to claim their free meals. Friday’s event at Felix’s will have 200 to 250 meals available, according to Wallace.

People can also buy meals through Low-Co Motion to donate to Meals in Heels, according to Wallace.

“We had someone yesterday buy two meals for themselves and said, ‘Throw another 10 more on top’ as a donation,” he said.

Meals in Heels will go on as long as the initiative is needed, according to Wallace.

“We all know what it’s like to be one situation away from not having anything,” he said. “Our community is one big family and we stick together.”

Meals in Heels will launch a Facebook page by Saturday to provide updates on future event locations and information about donating and volunteering, according to Wallace.