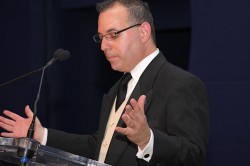 With the Atlanta mayoral race coming to a close, the sniping between the major candidates is on the rise. Caught in the crossfire is a gay assistant, Glen Paul Freedman (photo), who is a longtime LGBT leader and activist.

The latest round of attacks between former state Sen. Kasim Reed and City Council President Lisa Borders opened on Friday. Borders knocked Reed over his brother’s job at City Hall and challenged him to commit to a ban on hiring relatives as mayor. Reed fired back, criticizing Borders for having three City Hall staffers on her mayoral campaign.

Reed countered in a statement that Borders is the candidate operating with questionable judgment. Three members of Borders’ council staff are assisting her campaign.

“I’ll be interested to hear her answers,” he said.

Borders campaign spokeswoman Liz Flowers said two of them, Glen Paul Freedman and Camille Johnson, are doing volunteer work primarily after business hours for the candidate and not getting paid. Part-time council staffer Anthony Benton has been paid $4,800 since July to post signs for the campaign and field operations, campaign records show.

“There is nothing unethical,” Flowers said. “There is a clear, bright line and we have reported (the campaign disclosures).”

That’s when Freedman was caught in the crossfire. He’s served as Borders’ executive assistant and informal LGBT liaison for quite some time. His resume also includes executive stints with most every major LGBT group in town, including Georgia Equality, Atlanta Gay & Lesbian Chamber of Commerce, Atlanta Pride Committee and Human Rights Campaign.