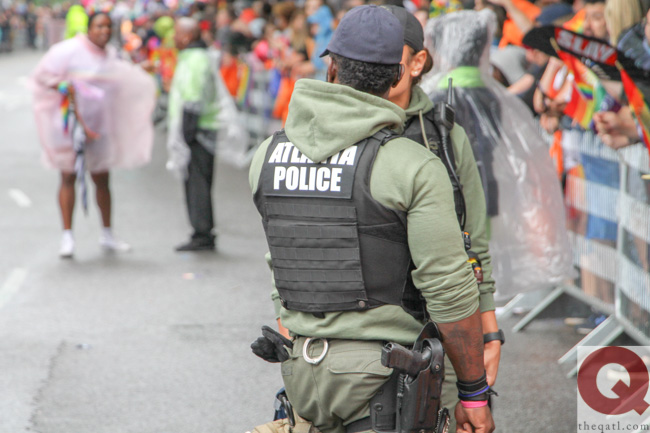 Spearheaded by LGBTQ Councilmember Antonio Brown, Atlanta City Council has unanimously backed, and Mayor Keisha Lance Bottoms has seen to enacting, the remaining law enforcement policies it lacked from the 8 Can’t Wait viral campaign you probably saw in your Instagram stories amid recent global outrage and activism. The proposals assert that decreasing the use of force can decrease police killings.

Simple enough, right? Sort of like how wine and dark chocolate can reduce cholesterol — the science is solid, but one basic principle probably won’t fix America’s heart problems.

8 Can’t Wait reforms sound obvious, and in an episode of Q Convresations, even Councilmember Brown wished they did more. The policies also fall way short of the original ten Campaign Zero — “zero” as in zero lives lost to police — proposals that ranged from de-militarization of police to decriminalizing non-violent and “moral” offenses. With APD’s budget going nowhere and abolition deemed too extreme, is anything actually going to actually change?

Black Lives Matter — the bare-minimum belief that black people have the same right to life, liberty and happiness as every other American — has reached new heights in the public consciousness. Campaign Zero has normalized vital, life-saving police reform policies like body cameras, community policing, and police accountability, but there’s a long way to go.

With a stream of new footage and new collective trauma with each police killing, changes shouldn’t have to wait. My concern lies with the toxic normalization of citizen fatalities at the hands of police, and the assertion that it is an inevitability.

The role of the police in America deserves questioning, especially when considering its funding. Just because police are doing what they're told doesn't mean they're doing something right and are not culpable if they aren’t.

The question cannot be how to reduce police killings but, “How do we eliminate them?”

Now 8 Can’t Wait has a direct response from 8 To Abolition. Its demands stretch further than even Campaign Zero’s idealistic initial policies. They assert that 8 Can’t Wait is “dangerous and irresponsible, offering a slate of reforms that have already been tried and failed,” going further to say they mislead the public and ignore the actual needs of criminalized communities.

Assuming that police killings are inevitable is defeatist, unproductive thinking. We need to widen our imagination to what’s possible. The militarization of the police, especially in contrast to healthcare workers in the pandemic, is why “Defund the Police” makes so much sense. You never hear about cops raising money for tear gas the way public school teachers collect box tops for basic school supplies.

Once it’s believed that there’s no acceptable ratio of citizens killed by police in a civilized world, the paradigm shifts. If we wish to live in a world of radical nonviolence, we must imagine a world without police brutality or mass incarceration and shape it with input from the people it affects.

In many cases, that world simply looks like a suburb, where community needs are addressed and met through a well-funded, community-led infrastructure of education, youth programs, healthcare and housing. Crime is low not because the people are better, but because patterns of poverty and injustice that cause it are addressed.

Police will never be the way to end crime, so why is Atlanta giving a third of its total budget to the police department? On both sides of the aisle, the state acts as if it has the right to injure or kill citizens that it’s not also willing to medically insure.

My plea is simple: imagine better.

Tyler Scruggs is a writer, musician, and millennial swashbuckler in Atlanta navigating the digital frontier through love songs for your Zune. Twitter @TylerScruggs or Instagram @Scruggernaut