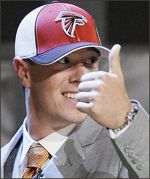 Making Matt Ryan the new face of the Atlanta Falcons wasn’t the primary reason the troubled franchise inked him to an expensive and long-term contract earlier this year. But it didn’t hurt, either, to bring on board someone with his cover boy good looks to replace the misbehaving Michael Vick.

AirTran likes it, too. They’ve inked Ryan to a two-year endorsement deal that includes at least four billboards featuring him around town. He’ll also be included in radio spots. “Laser Rocket Arm. Head For Low Fares” reads one; “Touchdowns As Often As We Do” is another. It’s the same sort of campaign Vick was in until the airline didn’t renew his contract last year.