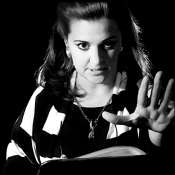 If there are two sides to every coin, a pair of plays opening Friday each flips the coin to see both sides: a Terrance McNally drama about opera singer Maria Callas, and a comedy about an amnesiac.

When it comes to divas, Maria Callas was regarded by many to be in a “class” all her own. Stage Door Players’ “Master Class” takes a look at the latter stage of the opera star’s career.

Gay playwright Terrence McNally’s 1995 play takes place in the early ‘70s, just a few years before Callas passed away at the young age of 53 in 1977. According to director Alan Kilpatrick, her career had ceased at that time, and she had not performed in a while.

Callas began a series of voice master classes, and her interaction with students wasn’t always pretty.

“McNally didn’t really go by the transcripts, but it was close,” Kilpatrick says. “In Callas, you had an older woman sensitive to the fact that her voice is gone. At the same time, she was at the end of her affair with Aristotle Onassis.”

Callas seemed to be a polarizing entity in the opera world.

“People loved her or really didn’t love her,” Kilpatrick says. “Some people think her singing voice was one of the greatest ever. I think she was also a great actress and she was dedicated. She worked hard and was very passionate about her art.”

“Marci and I have worked together many times, and I love getting to work with her,” Kilpatrick says. “She is a terrific comedic actress and a singer, but she can also do drama well. What I like about this show is that the character of Callas is larger than life but also very funny.”

Robert Egizio, artistic director of Stage Door Players, saw a version on Broadway with Patti LuPone and has loved the show ever since.

“It’s so much about the sacrifices we make to do art, to do what we do,” he says.

Although this is not a gay play per se, such as McNally’s “Love! Valour! Compassion!,” Egizio says some parts are “so McNally.”

“Here he writes about the attraction of gay men to Maria,” he says. “There’s even a line in the show where someone says ‘the fags want to be you.’ That is so true. I remember watching ‘Philadelphia’–the scene where Tom Hanks is listening to Maria Callas.

“What I love about Maria Callas is that she had such great passion for what she did,” Egizio adds. “But eventually, she got to the point where the passion and the drive had gone. She had great triumphs and great loss–everyone can relate to that!” 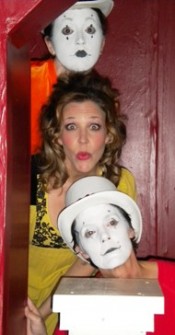 Among the cast members is openly gay actor John Markowski, an Onstage veteran seen recently in “The Wild Party” and “Bash.” He plays Kenny, the son of the main character, played by Carrie Walrond Hood (bottom photo, center).

“He is a troubled teen,” Markowski says. “He despises his father because he has abused both him and his mother. The character has a lot of angst and angry. He has started to smoke pot. Kenny really wants to help his mother and jog her memory.”

Despite some dark elements, Markowski says “Fuddy Meers” is a comedy, first and foremost, with plot twists and an “unexpected ride.”

“Master Class” opens Friday at Stage Door Players and runs through April 11. For tickets, click the name of the theater or call 770-396-1726.