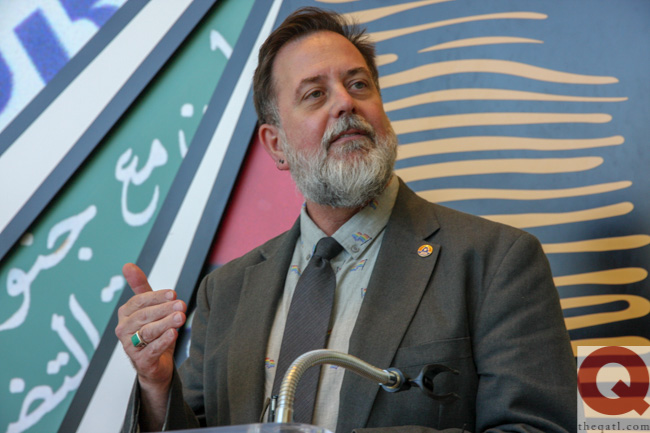 Opposing sides in the Masterpiece Cakeshop case agreed on one thing Monday after the Supreme Court's narrow ruling – it's time for lawmakers in Georgia to take action.

The court ruled 7-2 that the Colorado Civil Rights Commission treated baker Jack Phillips with “hostility” when it decided that the state's public accommodations law mandated that he bake a cake for gay couple Charlie Craig and Dave Mullins. So the court overturned the commission's ruling.

“Whatever the confluence of speech and free exercise principles might be in some cases, the Colorado Civil Rights Commission's consideration of this case was inconsistent with the State's obligation of religious neutrality. The reason and motive for the baker's refusal were based on his sincere religious beliefs and convictions,” Justice Anthony Kennedy wrote in Monday’s decision.

But the high court avoided ruling on whether civil rights laws could lead to an order that a baker such as Phillips must provide a wedding cake for LGBT couples against their religious beliefs.

“These disputes must be resolved with tolerance, without undue disrespect to sincere religious beliefs and without subjecting gay persons to indignities when they seek goods and services in an open market,” Kennedy's decision said.

The decision left LGBT activists and conservative politicians calling for action by lawmakers in Georgia, which has seen several years of pitched battles over anti-LGBT “religious freedom” legislation and gay-inclusive public accommodations bills.

“For the last five years, our legislature has spent time debating and ultimately rejecting licenses to discriminate,” Jeff Graham, executive director of Georgia Equality, said during a press conference at the Center for Civil & Human Rights in Downtown Atlanta.

“I hope that our legislature will look carefully at the lessons to be learned from the Supreme Court decision and will move forward in the next session to protect people of faith, but also to protect members of the LGBT community. This decision I believe supports the contention that all people are worthy of protection against overt discrimination. And we have a unique opportunity in Georgia to lead the country in finding that middle ground where all people can be protected,” he added.

“I think that it needs to be done in such a way that it does not infringe on the rights of some people of faith. And that frankly is the position that we have argued for the last several years, that someone’s sexual orientation, someone’s gender identity, is not and should not be considered an affront to someone’s faith,” Graham said.

“I hope that we can have a message that it begins to erode that false dichotomy that somehow people of faith are on one side and the LGBT community is on the other,” he said. “And I hope that that spirit of finding a way forward of protecting all people against discrimination is the conversation we can finally start to have.”

The decision – despite siding with the baker – recognized that LGBT people should be treated with dignity in the marketplace, said Sean Young, the gay legal director of the ACLU of Georgia.

“The Supreme Court did not embrace the theory that businesses have a blank check under a twisted theory of the First Amendment to discriminate against gay people. Nowhere in the decision did the court even suggest that it would buy into that kind of unprecedented theory,” he said.

Young also noted that the baker’s refusal occurred in 2012, when Colorado did not recognize same-sex marriage as it is required to do today.

“The point is clear that this decision occurred during a unique time in our history, and thanks to Obergefell v. Hodges — which legalized gay marriage throughout the nation in 2015 — that circumstance will never be a situation again in the United States,” he said.

Politicians in Georgia jumped into the fray with reaction in the wake of Monday’s ruling, with the two GOP nominees for governor celebrating the court’s decision.

“The Supreme Court confirmed what we already knew: The Constitution protects religious exercise and expression,” Lt. Gov. Casey Cagle (second photo) said in a prepared statement. “There’s no clause that says 'unless the left deems it offensive.' As governor, I will make sure no Georgian ever has to take a case to the Supreme Court to defend their religious freedom.”

Secretary of State Brian Kemp — who faces Cagle in the July 24 runoff — tweeted, “I applaud today’s decision by #SCOTUS. As governor, I’ll stand up to the radical left and politically correct. We will never apologize for protecting religious liberty and living out our faith.”

Stacey Abrams, the former House Minority Leader who will face the winner of the GOP runoff in this November’s gubernatorial election, referenced the years-long “religious freedom” fight in Georgia in a prepared statement after Monday’s decision.

“Georgia families and the business community have made clear again and again that discrimination under the guise of religious freedom has no place in our state,” Abrams said. “Under my leadership, every Georgian will know they can live and work in a state that will treat them with dignity, respect, and allow them to prosper, no matter who they are.”

“While the #MasterpieceCakeshop decision today doesn’t reverse current #LGBTQ protections, Georgia has two potential GOP nominees who would do so as our next governor,” Wilson tweeted. “It’s vital that we stand up and speak out on this. We must not accept state-sanctioned discrimination.”

And state Sen. Josh McKoon — the face of Georgia’s anti-LGBTQ “religious freedom” effort — chimed in on Facebook, saying, “The decision in Masterpiece Cakeshop as I read it simply says that the baker couldn’t get a fair hearing before the Colorado Civil Rights Commission. It has zero impact on the need for a RFRA here in Georgia. Nor does it address the separate question of what happens when free exercise claims collide with LGBT protected class claims.”

McKoon came in third in last month’s Republican primary for secretary of state. It is unclear what he will do after he finishes his term representing the Columbus-area district early next year.

The gay couple at the center of the Masterpiece case also had a reaction per a statement issued through the ACLU.

“Today’s decision means our fight against discrimination and unfair treatment will continue,” wrote Charlie Craig and Dave Mullins. “We have always believed that in America, you should not be turned away from a business open to the public because of who you are. We brought this case because no one should have to face the shame, embarrassment, and humiliation of being told ‘we don’t serve your kind here’ that we faced, and we will continue fighting until no one does.”

For Rev. Matt Laney of Virginia-Highland Church — an LGBTQ ally who wore an “I’ve met God, they’re trans” shirt to Monday’s press conference — this issue goes to the heart of the Christian faith.

“Jesus shared bread with everyone, and I think today he would encourage us, and Christians in particular, to bake cakes for everyone,” Laney said.