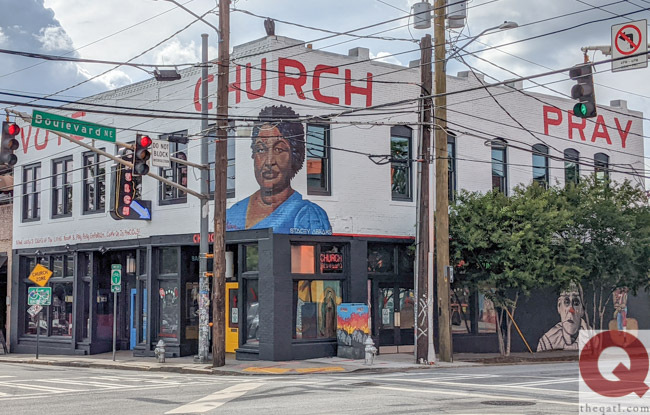 After months-long delays amid the coronavirus pandemic, Henry’s kitschy bar at the corner of Edgewood Avenue and Boulevard hosted a soft reopening on Tuesday. It unveiled an expansion into the space next door that doubles its size to some 6,700 square feet.

“Everyone who enters Church after the expansion says it feels just like Church, that it flows between the spaces like it’s always been there,” Henry told Project Q Atlanta.

“They also say that the new part is a diversion from the old part,” he added. “There is so much space, and the new part is designed to be able to be partitioned off for private events, weddings, wrap parties, birthday parties, etc.”

The transformation brings eye-stopping artwork and slogans like the original space, plus an air hockey table, a second ping pong table, more games and more seating. There are two new stairwells, a huge kitchen for an expanded menu, six restrooms and TVs throughout the space.

“We have set up a streaming system for vintage movies, Pee Wee Herman, 80s PTL Club shows, church choirs, preachers doing their thing,” Henry said. “There will be no sound from the TVs unless we are showing debates, sports ball games, presidential elections, etc. It’s going to be fun as hell.”

“We also upgraded our photo booth to newer technology, so it rocks,” he beamed. “It sends a text with pictures in addition to the old timey strip of pics.”

An outdoor makeover (photo) was complete for most of the year. Murals honoring Stacey Abrams and Puddles the Clown remain intact, while white paint and red lettering make a cohesive impression that dominates the corner and the block.

Patience is a Virtue

Behind the new façade, the indoor transformation was more than ready by spring. Then of course, it was a matter of waiting. And waiting.

But as Henry’s artist alter ego and bar namesake Sister Louisa often paints into her artwork, patience is a virtue.

“We were determined to not stop… somehow, someway,” Henry said.

The idea of a June 1 reopening under state guidelines didn’t sit well. Through the summer, Henry continued to fret the COVID crisis and put off reopening longer than most other gay-owned bars and clubs in town. Then a stark realization hit him.

“I realize now that the coronavirus is not going away anytime soon,” he said. “It was a very difficult decision to face it head on and reopen the right way by protecting our staff and parishioners, but we pulled the Band-Aid off, and we will be doing everything in our power to keep everyone safe.”

For the first time since March, a limited number of patrons were allowed to experience the new space on Tuesday. Business is back with cautious optimism and measures to minimize and mitigate health risks.

“We’ve installed room fans, air purifiers, opened up all three bars, have ‘satanizer’ for everyone everywhere, and all of our staff will be masked and gloved,” Henry said. “All parishioners will have to have a mask on to enter and pledge to help keep everyone safe.

Capacity is limited to 80 people, which allows for well over the recommended space between people. The patio, which doubled in size with the expansion, is also available for outdoor fun.

Speaking of fun, Henry and his staff are ready to get back to what Church is known for. The bar opened in 2011 to queer-inclusive parties, international attention and visits from celebrities including Lady Gaga.

Church went on to be voted best in Atlanta,  then Georgias best, and even the Coolest Business in America. In 2013, Henry successfully took the concept to Athens, and in 2018, he opened a campground retreat under the Sister Louisa’s banner.

As always, Henry said, turning this latest vision into reality was a team effort.

“It’s a transformation that I have so many special people to thank for,” he said. “I feel like an orchestra conductor having spent too much time pointing, but in the end, it’s fabulous. I apologize in advance if there’s a line when you get here.”

His secret to success? There isn’t one, Henry said.

“It’s art more than business,” he said. “I have no fucking idea what I’m doing.”

No one would blame Walt Bilinski and Steve MacNeil if they laid low after losing 90 percent of sales at No Mas! Cantina back...
Read more
Community

Ben Ku and his fiancé are using YouTube, supplies from the hardware store and inspiration from a popular video game to make Halloween safe...
Read more
Community

LGBTQ Atlanta dentist Chip Hill, DDS, PC had one leg up on the rest of the world back in March. As broadsided as anyone...
Read more

Some might say that this coming Tuesday is the most crucial day in years for queer safety, rights and survival. It’s time to flick...
Read more
Load more
17,369FansLike
5,928FollowersFollow
7,639FollowersFollow
MOST POPULAR