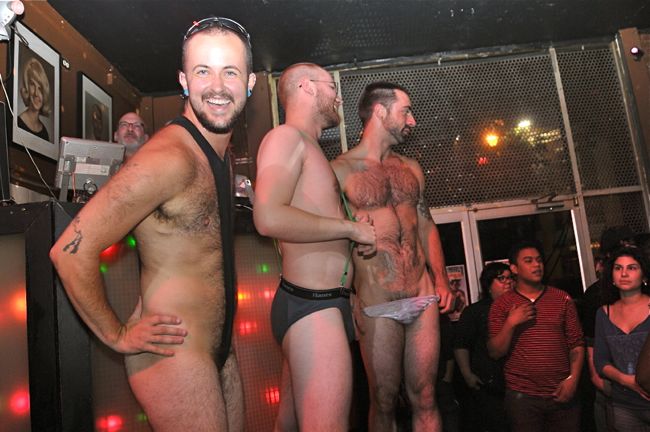 Forget what you thought you knew about swimsuit contests. As they are wont to do, the guys at Mary’s flip-turned the traditional gay idea of a man pageant on Friday at the annual Boys Of Summer contest.

You were expecting coifed and manscaped hunks in box-cut trunks? Not a one. For the fifth year in a row, the bar warned us that anything goes. It did.

Contestants, like Mary’s itself, went the non-traditional route with a lineup of guys (top photo) in everything from banana hammocks to pool toys to bikinis held up by suspenders.

With a little help from shots that flowed like water, the guys were loose and unafraid of letting their hair—and their swimsuits—down to wow the crowd and impress a panel of hilarious judges with just how far they were willing to go. Senor Cojones played master of ceremonies, and Stuart was in the VJ booth all night.

The results in our photo album read more like an off-the-reservation house party than a bar night, and that’s just the way Mary’s likes it.

The winner (second photo, in silver) walked away with a cool $100 cash and bragging rights for the rest of the summer.

In short, Mary’s proved once again that it’s like no other gay bar. Soak up their vibe all week, like Tuesday’s award-winning Mary-oke, a different themed DJ night each Wednesday, All-request Night on Thursdays, and a weekend lineup that includes Boys Room on Fridays, Hot Mess! on Saturdays and special events like the Boys Of Summer contest whenever they damn well feel like it. This Friday, June 17, Boys Room is replaced by the Bearracuda PreParty with the guys from the traveling SanFran party who hit Heretic on Saturday.