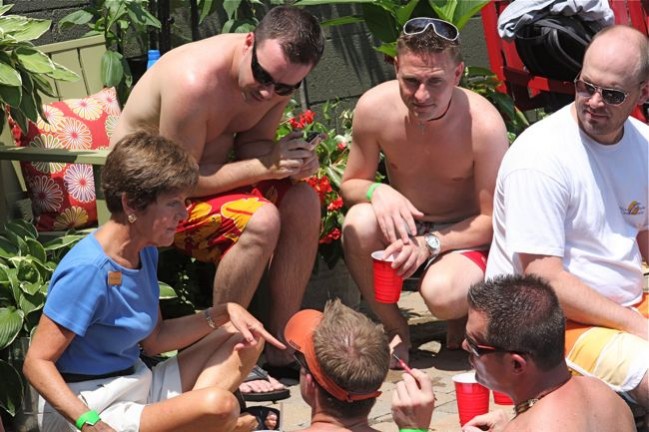 Her days of cavorting with shirtless gay boys and giving tips to drag queens this summer are over: Mary Norwood has pulled the plug on her indie bid for chair of the Fulton County Commission.

The surprising news comes a day after Norwood lost a court challenge and as time runs out in her quest to collect nearly 23,000 signatures to gain a spot as an independent on the November ballot. The gay-friendly Norwood, who made support of LGBT issues a serious piece of her failed mayoral campaign last year, had hoped to unseat Chair John Eaves, who hasn’t been particularly vocal when it comes to LGBT issues.

This from the Atlanta Journal-Constitution’s Jim Galloway:

One day after a judge refused to intervene in a dispute over the validity of her petition signatures, Mary Norwood has apparently pulled the plug on her independent campaign for chairman of the Fulton County Commission.

Barry Garner, director of elections for Fulton County, just confirmed that Norwood did not qualify as an independent candidate before today’s noon deadline.

Comment has yet to come out of the Norwood camp.

Norwood’s apparent departure from the race comes the same day that Eaves, who also attended last week’s Evening for Equality, came out in support of gay marriage. Norwood’s had that position for some time.

UPDATE: A spokesperson for the Norwood campaign tells the GA Voice “it’s status quo” and they are continuing to collect signatures. A Fulton elections official tells the paper that Norwood missed the noon deadline on Friday to file paperwork and pay the $1,251.45 fee to qualify.

UPDATE II: Two photos of Norwood were posted to the campaign’s Facebook page about 5 p.m. on Friday with the status “filing for candidacy”. But Norwood hasn’t responded to media reports — or questions from supporters posted on the Facebook page — that she missed the filing deadline.