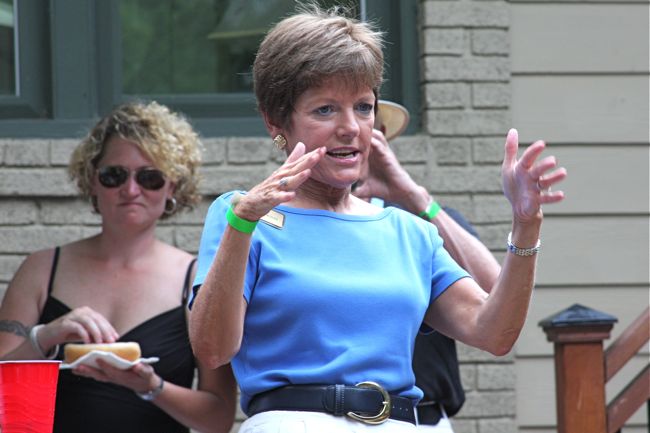 Maybe the caption to this photo of Mary Norwood should read, “I only missed the filing deadline by this much.” Now her campaign for Fulton County Commission chair is in question.

After a mini-media stampede on Friday speculating that Norwood’s campaign had ended when she failed to file paperwork and a $1,200 fee by noon, Norwood broke her silence about 10:30 p.m. with this surprising nugget: We mixed up the time for the deadline — which, by the way, is clearly spelled out as 12 p.m. on the website of the Georgia Secretary of State.

Norwood’s explanation? This is what she told the AJC’s Jim Galloway:

The former Atlanta councilwoman admitted that she submitted her notice of candidacy, for the chairmanship of the Fulton County Commission, after the state-imposed deadline of noon Friday.

Norwood said she handed her paperwork and check to Barry Garner, director of elections for Fulton County, around 3 or 4 p.m.

“This one was a mix-up in the time,” said Norwood, who has been focused on gathering up 22,000 or so signatures by a July 13 deadline.

Now it’s up the Fulton County elections board to decide what to do — the same panel that offered advice to Norwood earlier in the campaign that ended up in court. It’s a bit ironic that Norwood finds herself in this political pickle.

She’s built her campaign for Fulton chair around the idea of bringing stronger and better organized leadership to what’s long been known as Fulton’s poorly managed bureaucracy. Yet the campaign misses — or ignores — a well-publicized deadline and when asked on Friday, a campaign spokesperson didn’t have a clue that anything was amiss.

And Norwood, who’s successfully worked social media into her mayoral campaign last year and the current Fulton campaign, has gone silent on her website and Facebook page without offering any details about the confusion.

The gay-friendly Norwood, who made support of LGBT issues a serious piece of her mayoral campaign, wants to unseat Chair John Eaves, who hasn’t been particularly vocal when it comes to LGBT issues.

Norwood’s campaign confusion came the same day that Eaves, who also attended last week’s Evening for Equality, came out in support of gay marriage. Norwood’s had that position for some time.