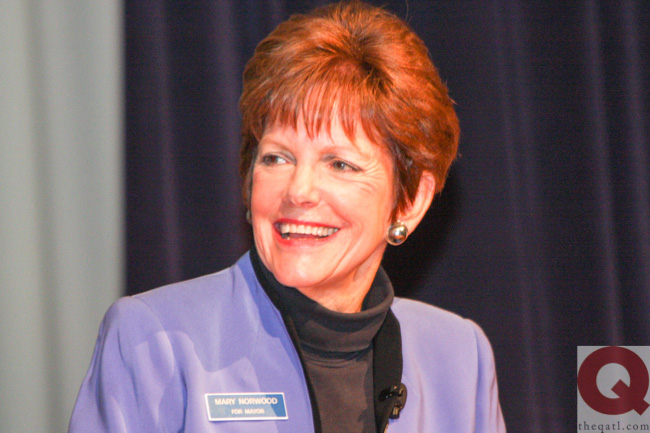 Mary Norwood – flush with LGBT supporters and equipped with a lengthy record on equality issues – picked up two key endorsements in the closing days of the Atlanta mayoral runoff. Cathy Woolard and Georgia Equality both gave her a thumbs up.

The endorsements came Wednesday, just a day after Norwood and Keisha Lance Bottoms participated in a forum hosted by Woolard. The former Atlanta City Council president – the state's first openly LGBT elected official who finished third in the mayor's race – quizzed the two remaining candidates on a variety of issues, including their top three LGBT priorities.

Woolard said the final calculation for her came down to ethics, according to the AJC.

Woolard said she holds Bottoms in high regard, and Woolard gave Bottoms an edge on issues of social justice, affordable housing and she noted the importance of African-American leadership in a majority-black city. But Woolard gave Norwood the edge on managing the growth of the city and on ethics.

“I feel like the lack of transparency at City Hall has crushed the spirit of our city and I feel like we need a clean break with this administration and a new start here with a fresh set of players,” Woolard said.

“I’m very pleased and delighted that Cathy Willard has endorsed me for mayor,” Norwood said in a prepared statement. “I admire and respect her commitment to Atlanta, and look forward to working with her closely as we manage our growth and solve our transportation and affordable housing issues. Cathy and I are also committed to transparency in government, rooting out corruption, and restoring trust and ethics in city government.”

The board of directors has voted to endorse Mary Norwood for Mayor. Mary was able to clearly articulate support of the following policy areas we have prioritized:

Finally, she now has the support of not only Cathy but also Shirley Franklin, Ceasar Mitchell and John Eaves. All of whom are elected officials we have worked with closely in the past.

As we've stated before, in a period in which many people seeking elected office are supportive of the LGBT community, the Georgia Equality Board of Directors will issue an endorsement for a candidate who we feel is best placed to advance our policy agenda. The lack of an endorsement should not necessarily be viewed as a negative reflection of a particular candidate’s views on LGBT issues in general.

We encourage all of our members who live in the City of Atlanta to turn out and vote in this very important runoff election, and to support our newest endorsed candidate, Mary Norwood.

Bottoms picked up the endorsement of Georgia Stonewall Democrats, which said she's committed to advancing LGBT and equality issues.

Keisha Lance Bottoms is committed to continuing to move the city forward, not only on LGBTQ equality and inclusion but on issues important to advancing the quality of life for all. We have confidence her administration will be seriously dedicated to addressing the challenges in Atlanta’s future and surrounding herself with diverse and forward thinking problem solvers.

We support her expressed vision for a progressive, transparent, and honest administration that will position Atlanta and all of its citizens to thrive in the 21st century.

Bottoms and Norwood also addressed LGBT issues – including their records, HIV and policing – in recent in-depth interviews on Podcast Q.